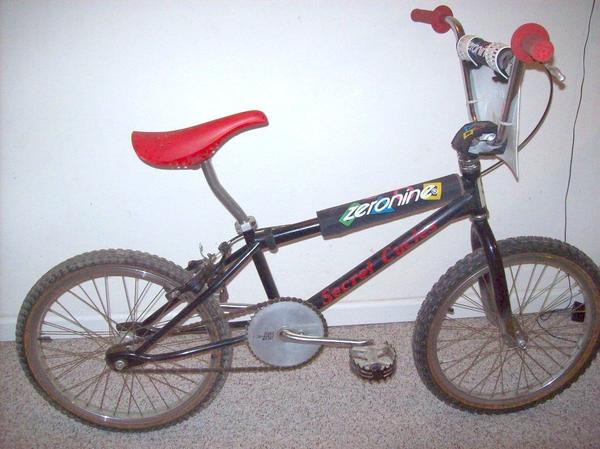 Please look at the pics and keep your eyes peeled and let me know if you EVER have seen one or find one. I will make it worth your while!! I would love to find another one!
In late 1987, while both on the Editorial staff of BMX Plus! and American Freestyler, my partner Scott Towne and I had 6 of these frames made by Chris Herting and Jim Emerson of American Iron. One chrome (sold in Canyon Country CA in August '88), two black (here's mine) and three red. I can now only account for mine. Scotts was stolen out of the GT Bicycles team van in '88 (I think in the Huntington Beach area), another red one was stolen/picked off the side of a mountain after a car accident around 88/89, and a red one was sold used to a guy (not by me) at the Simi Valley BMX track in the early 90's and the final one disappeared, sort of, after our rider Chris Daley (Palmdale/U local dirt jumper) moved on to a larger frame, he kind of lost track of it.
I'd like to get one back for Scott as these frames carry a lot of sentimental value for both of us. So please, jog your memory, ask your friends, search Craigslist/pawn shops/flea markets/bmx tracks/etc.
I made a modern (1996) version (25 of them) with a wishbone seat tube, canti mounts, threadless headset, and similar/yet different rear dropouts. If you find one of those, that's cool and I'd like to hear about it, but I'm really after this particular first generation model. Thanks.

More Bikes From TuRBo Todd (13 bikes in museum. View all)