This company was later a division of GT bicycles. Originally made bikes with removable steel rear piece, later made aluminum rear models, as well as 24" 2013 and now they are back!! Auburn racing's new site.

from the new sites History page: Auburn Cycles was founded in 1988 by Todd Huffman and Bob Morales. The project was originally going to be a Honda-branded product that Huffman had pitched to Honda Motor Corp., but, at the last minute, Honda decided not to license out their name to a BMX bike company. With the product already developed and ready to go into production, Huffman and Morales decided to continue the project and use a different name. Huffman came up with the name Auburn from a 1930's classic sports touring car. Morales designed the original logo, and Auburn Cycles was born. Auburn's first product was a two-piece "modular" BMX racing frame made of Chromoly steel. Some of Auburn's first factory team riders were Rod Beckering, Todd "TC" Corbitt, Robbie "Robo" Morales, Erick "Big E" Bartoldus and Danny Millwee. The frames were further developed using an aluminum rear end called a "Works Link." In 1989 the company was acquired by GT Bicycles and Huffman was hired by GT to manage the brand in addition to his Marketing Director title. GT produced Auburn frames and bicycles until 1997. 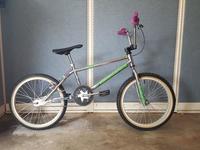