Sling Shot BMX "A FRAME OF MIND"
Sling Shot BMX bikes use a unique mid-frame "Suspension System".
The conventional down tube is replaced with 2 Stainless Steel Cables suspended from 2 Die Springs.
There is a "Hinge" on the top tube right in front of the seat tube.
The principal employed is to use the spring and cable system to return the energy
lost during the pedal stroke.Mark Groendal from Grand Rapids, Michigan is the inventor and builder of the Sling Shot bicycle frame design.
This design flies in the face of over a hundred years of the prevalent bicycle design philosophy known to mankind.                      Bicycle suspensions were not a new thing, but previous designs did not cut weight.

Mark Groendal designed the first prototype BMX Slingshot in 1980, and applied for
his first patent in 1981 for his Flexible Bicycle.
Greendale Bicycle Co. was founded in 1982 by brothers Mark and Joel Groendal in
Wyoming, Michigan.
The concept was to use a flexible plate, as a hinge.  This hinge had to possess physical
properties that allowed a large amount of elastic strain and endure a range of
input frequencies and limit lateral strain.
Several prototypes were made and tested using sections of snow skis for flex plates and
heavy gage steel tubing for elemental stiffness and strength.
Production models utilized hand laid fiberglass and Kevlar.

In 1983 the First Sling Shot production 20" BMX frames were built.
They utilized quad top tubes out of 4140 Cro-Mo square tubing, extra support struts,
a large flex plate, twin cables and springs.   Cables were made utilizing sailboat
technology: stainless 3/16â€ cable (2,000 lb breaking strength) with swaged bolts
at one end and a swaged button on the other.  Die (tool & die) compression springs
were also utilized, as they were readily available in a multitude of spring rates,
keep their properties over time and in variable conditions.

Initially 7 were produced in one size only. The frames were given to racers for demanding
testing and feedback.  According to several of the "factory racers" 3 of the first 7
frames did not survive testing, largely due to the use of the 4140 tubing.
Subsequent bikes were built of 4130 Cro-Mo Tubing.

Mini BMX Bikes
Only  (2) Two Sling Shot "Mini BMX Frames" were built, they were for the owners children.
They utilize a single Cable & Spring Suspension, because of the bikes reduced size and
being designed for a smaller lighter rider.

24" Cruiser BMX Bikes
All that is known about 24"Cruisers is that there were not large numbers of them made.
They were known to have been made in 1985 from serial numbers, the research is ongoing
as to how many were made and what years. 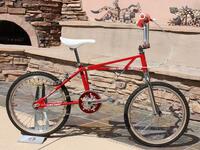 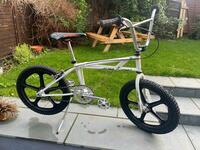