Wacky design, as you can see below, also made cranks, need more info on this company.
Started in 1992.

From an email I got:

When I raced my Rumblefish, in 1992, a gentleman and his son were asking about my bike.  They had never seen anything like it.  The father wanted to take some pictures of it so I said okay.  A few weeks later they showed up again, this time with a rough cut, made in a garage version of the Rumblefish.  That was the birth of jad in 1992, not 1990.  I do not know what has become of them now, but i know that in the mid 90's a close freind of mine was seriously injured due to their garage factory.  A set of faulty forks were given to him because they didn't have an up to par set at the time.  Forks broke at the head tube and sent him face first into the face of a double.  Concussion, brain swelling, it wasn't pretty. 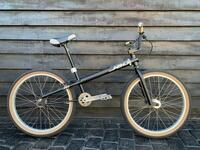