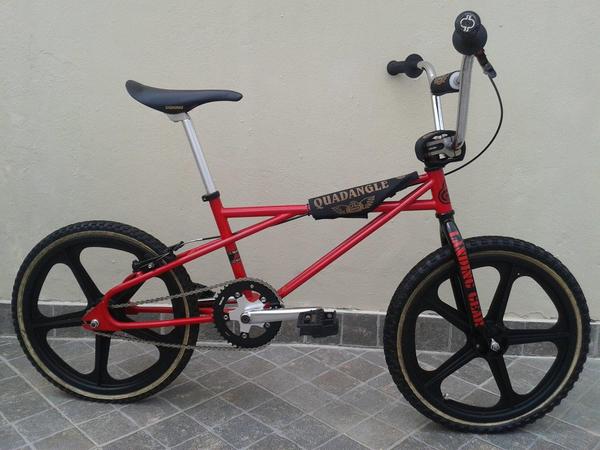 Panama City, Panama. It was 1979 when my father was tired of buying expensive bmx parts for me when he decided it was time to open his own bmx store. We named it Panama BMX. We started sending letters to all the Californian and Japanese bmx companies - that’s right, letters, no faxes, no emails – it took no less than a month to receive an answer. I remember going to the post office with my father to check if there was a bmx company letter (a letter with a bmx logo) – for me, at that time, it was unreal. It felt like Christmas every time we receive one… price lists, samples, it was the best! At that time I had a blue Team Mongoose, so we were very anxious to receive news from Bmx Products Inc., but they never answered our letters. Instead, we built a great business relationship with smaller companies (at that time) like Red Line, Diamond Back, GT, and also companies like Shimano and Suntour. When we ordered our first shipment from SE Racing, we decided to go for the more commercial (or easier to sell P.K. Ripper). The Quadangle frame was too crazy, as my father said, so I agreed (commercially speaking) not to order it. I ended up getting a P.K. Ripper, it was fun, but never got used to it. I traded it later for a Red Line PL20. Anyway, I always felt bad or intrigued for not insisting more on adding a few Quadangle frames on that first and last order… (it was the last order of SE Racing because it did not sell as well as other brands). Anyway, after more than 30 years, I got my first Quadangle – thanks SE Racing! The 2009 model was red and gold. Sorry but I couldn’t stand the gold parts and stickers, so I changed them all for black – it turned out great. The bike: 2009 SE Racing Quandangle Looptail frame, SE Racing Landing Gear forks. The gold parts were replaced by this: Original 1980's GT Pro Performer Handlebars (old stock from Panama Bmx), Rims: Skyway Tuff II Wheels, Seat: Kashimax Aero with Red Rails (Made in Japan), Grips: A’ME Tri Old School Grips, Brake Lever: Shimano DX (Original), Pedals: MKS Graphite Z Style (great find!)