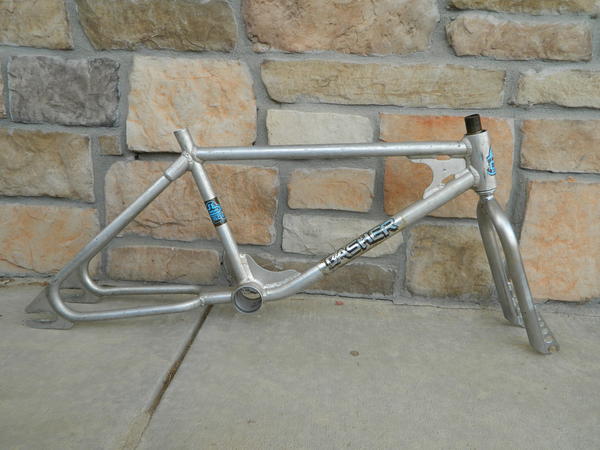 SE Basher - produced by Race Inc. - One of 3 different types of Basher's sold by SE Racing

So the story goes, back in 1982, SE Racing couldn't produce frames fast enough to meet demands and it so happens that Race Inc. had an overstock of RA-7 frames on hand. It would make total sense for Bastain to work out an arrangement, considering how close the OM and Bastain seemed to have worked together over the years. I don't have exact numbers on how many RA-7's were decaled as Basher's, but I would guess less than 100, as they seem to be pretty rare.

Maybe this is not exactly another BBB (Bill Bastain Bastard) but it's definitely another one to mix things up. This frame has OG decals and finish, she's not minty but I HAD to grab her for my collection. I believe frame was a shiny ball-burnished finish at one time, long before it oxidized on it's own....but there's also a possibility that it was just clear anodized to begin with, which would also give a slightly "satin" appearance.

Here is the info. that I've come across:

The 3 versions of the Basher: 1) Mild steel we'll tentatively date to 79. 2) The Race Inc RA7 style in 82, 3) hi tensile 1010 Murray in 83ish. The Team Murray made one was a X20 frame with SE decal (per Brian Hays) The Murray/SE Bashers were re-stickered and sold at Pep Boys. (per Sean Ewing via Mike Devitt) This link has some good 411: http://bmxmuseum.com/forums/viewtopic.php?id=499556

More Bikes From Leviathan (59 bikes in museum. View all)