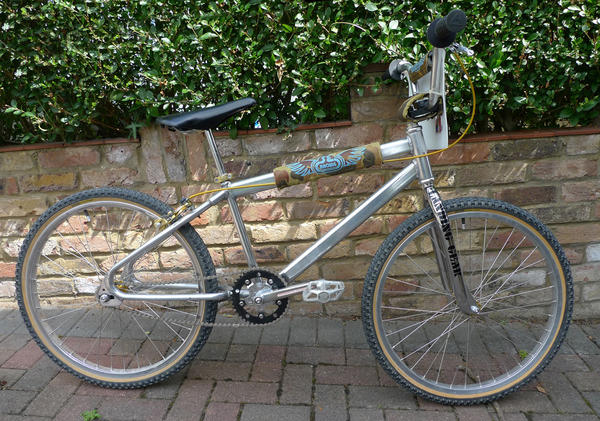 This bike started out as a race cruiser for a young rider in the UK. It was early days here for cruisers and the fashion was for short wheelbase bikes. The Floval was 'customised' to fit the rider better and several modifications were made. The original Landing Gear forks were chopped to lower the front end, and the dropouts rewelded straight down and not leading edge. The rear dropouts were 'shaved' a bit, probably to save weight, and the slots lengthened to make the wheelbase shorter. Several holes were also drilled in the pursuit of a lighter bike..

It was sold to a friend of mine in the 90's..He sold it on to someone who managed to crack the seat tube. This was repaired and the bike was fitted out with ugly parts and then neglected. My friend eventually bought it back from this guy, had big plans for it but family life took over..I stepped in, stuck some nice parts on it and I've had it for around ten years now.

It became my weekend rider and I started to race it at OS meets when I could. About five years ago I sourced some NOS LG's and it handles much better with these. I've ridden many OS cruisers and this still rides smoothly. I raced it last in 2011 at the annual OS BMX meet and 30 years on I think it still likes to hit the track as much as I do.