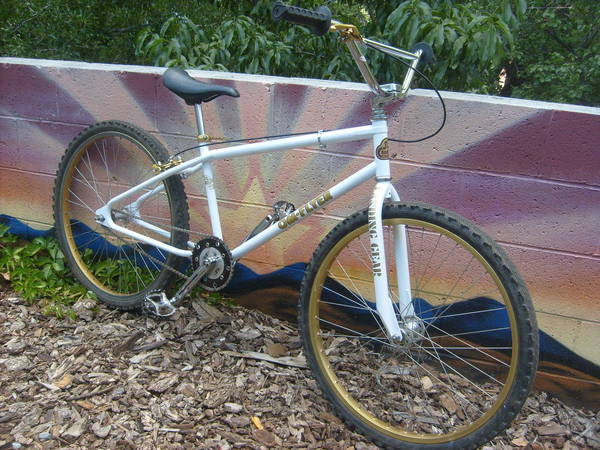 This bike has been kicking around in the Nor AZ "family" for some time now.  It's believed to be an '80 or '81.  The serial number (000268)is not much help in this.   Anyway this bike is super nice and has been ridden and raced for 3 decades.  It had the standard SE Sal headtube fix at some point.  I think that's cool and a testimony to history of being shredded for many years.  I just got this bike out of my friends rafters in his garage. It was just the frame, fork, headset and wheelset.  He claimed it had not been put together since the warranty work years ago.  So we worked out some trade and BAM!  It's mine now.    I had it powdered gloss white and slapped the repop decals from BMXproducts.com (thx BC)   It has a Diamondback Turbo stem, stamped mongoose headset, aray 7x laced to sunshine hubs, redline flight cranks, suntour seat clamp, stamped gt post, gt power disc, tuff neck 39t chain wheel, shimano 18 t freewheel, suntour xc pedals, powerlite bars for now but that will be swapped for some OM bars.  This bike is crazy.  The chain stays are unreal long, unlike my '98 OM.  Hard to wheelie, but awesome to cruz.  I really love having the alpha and omega of OM's.   I'll update the photos as the right parts come in.

More Bikes From capt.shred (48 bikes in museum. View all)