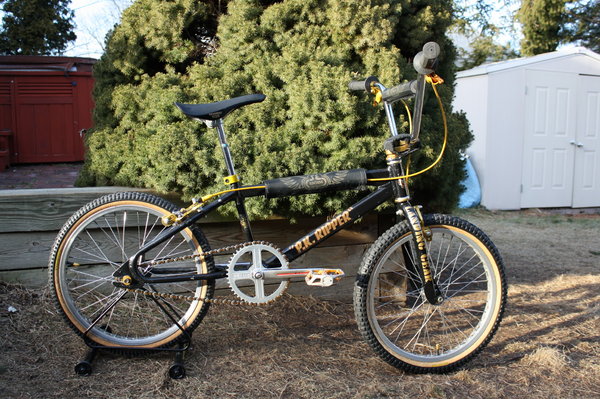 My original bike from back in the day!!

I bought this bike NOS in the box when i was 13 years old in 1993!  I turned wrenches a little bit at my local bike shop.  I went in one day to grab some BMX goodies and the owner said that they were changing owners and everything old had to go! When I pulled the frame out of the box (the box looked like it was used as a coffee table..I threw it out minutes after getting it home...ugh!) I have never seen a bike with "flat" tubing, let alone a black bike with gold decals!!  I paid $50 for it and ran home to build it.  Well it was 1993 so i built it up with all 90's parts...ewww!  I spent alot of time riding dirt, cruising the streets and polishing it up!  I got my license when I turned 17 and the PK got put in the garage attic to be forgotton about.  One day my father and I were working on one of his old cars and I had to go to the attic, there she was all dusty and cobwebbed up.  I cleaned her up and slapped her on ebay (what does a 17/18 year kid need a bike for???) It never sold on ebay so I searched around the internet and found old BMX sites and got HOOKED.....BAD!!!  I now was on a mission to build her correct and NEVER EVER INTEND TO SELL!!

here is a parts breakdown:

Original SE Wing Thing (goes on your arm to make you faster!!!)

More Bikes From OLDSKOOLPK (13 bikes in museum. View all)