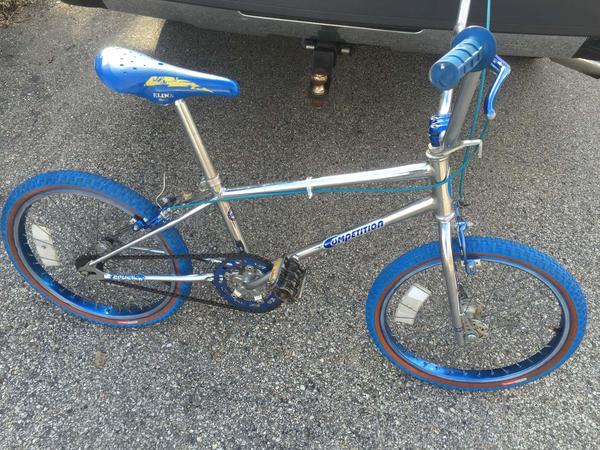 The ONLY complete "Out of the box" Catalog factory built survivor on the museum with original prismatic hologram decals and ALL parts intact ! (Minus Tires)

Well, this one took me by surprise and blew my mind. 15 years of collecting, over 200 bikes in total of which roughly 30 have been in the STING family, and this is one I have never had .... until yesterday ! I Walked in to a shop I had only ever been to once about ten years ago, and there it was. I have seen around ten of these frames turn up, and of course the outrageously nice Red custom built bike that is also on the museum here in the last decade or so. Also, One other true Black complete that I missed on Chicago Craig's List as well from around 2006. This is a RARE , One year only offering at the end of Schwinn's run of Stings. This is the last "re-invention" of branding for the original SX-2000, which then became the Sting competition, and for 1982 only, simply the "Competition" as you can see here via the prismatic down tube decals. For 1982 they also changed the handlebars to these killer V bars and added the Schwinn branded Elina Lightning bolt seat. Other than that it is pretty standard "catalog offered" complete as it's previous 1979 to 1981 predecessors. This one is very clean, and only missing the pedal end caps and original tires from new. It will only be cleaned (hand polished) and enjoyed.