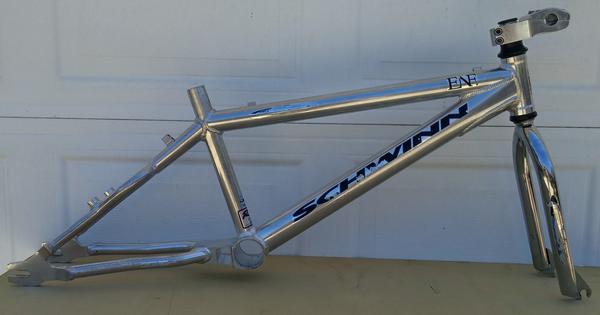 100% original ENF. As sold: frame/fork/stem/Dia Compe Aheadset with the ultra rare early black decals intact. Designed and welded in the USA by the team that created the Homegrown mountain bikes sharing Schwinn's patented Epicenter stays and an industry first extruded bottom bracket/chainstay yoke. Tips the scales at a svelte 7.25 pounds as shown.

This bike's story is a common one, a guy and his buddy saw it in the catalog, they each ordered one (the only ones he ever saw in Nevada) and raced it for a couple years, discovered cars and girls at 16, so the bike goes into storage. FF to 2015 and a member here bought it for the wheels, cranks and bars and I scored the rest intact. The only thing missing are the brake posts. Later bikes shipped with red dropout washers, dunno if the early frames did or not. Total production of these frames is estimated at just over 1000 units. The transition date to the standard red 95/96 decal set decal is unknown, though it was prior to frame #236.
Christmas 2016 this bike found a new caretaker.

More Bikes From ChattyMatty (5 bikes in museum. View all)