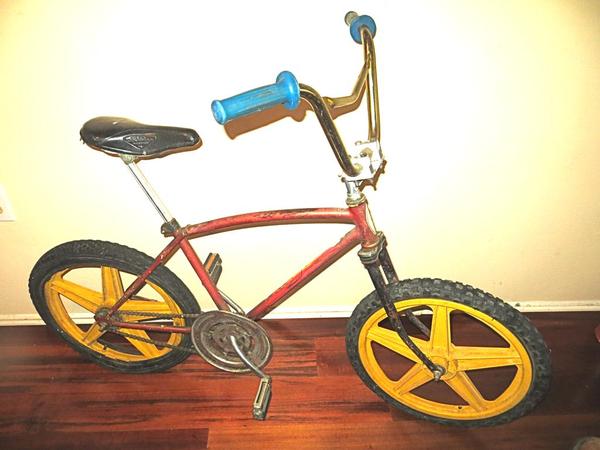 Sucker For A Schwinn **SOLD**

Snagged this done up BMX Schwinn Speedster off of CL for cheap.  It's an early fastback style.  The MH serial number indicates this was manufactured in December of 1972. This is first year the 20" Speedster was manufactured for Schwinn making it quite a gem.  I was able to locate a '73 advertisement via: http://bikecatalogs.org/SCHWINN/MODELS/Speedster%2020%22.html  I am guessing 1973 was the first year the 20" Speedster was advertised.  Under the gobs paint I can see that the original color is Kool Lemon making this as advertised.

Whoever owned this pup must have come of age with BMX and upgraded this over the '70s.  It had been sitting in "grandpa's garage" of the the dude I bought it from.   It's equipped with perfect Hunt Wild BMX grips, Carolina Enterprises Mags, Matthews double clamp stem, anodized gold V-bars, fluted seat post, Bendix Mexico coaster brake, Wald cranks, nearly perfect Schwinn saddle, probably Schwinn forks.  I included a few comments I got when I posted this in the Catchall section. Between arizonalouie, duckman and comet77 I think they really captured this essence of this find.

arizonalouie
I have never seen Schwinn forks like those. I would be surprised if they turn out to be Schwinn.
That bike is cool as shit though. Def and early example of piecing together a tough MX rig.

duckman
This is how BMX started I had a sting ray my dad put bars on from one of his dirt bikes and a seat from a ten speed  . Raced it in 1977 at a local track back then . Nice to see stuff like this .

comet77
Great Bike. Looks Like something I did when I was a Kid. Looks like three or four bikes in one. Fastback Frame, Schwinn varsity or similar model seat, the handlebars look to be from an old Schwinn Thrasher that had the gold anodized parts. The forks are definitely not Schwinn, but who cares. The bike Looks great as it is, fun bike.
ENJOY!

More Bikes From TEXMEXBMX (8 bikes in museum. View all) 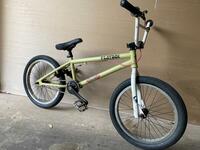