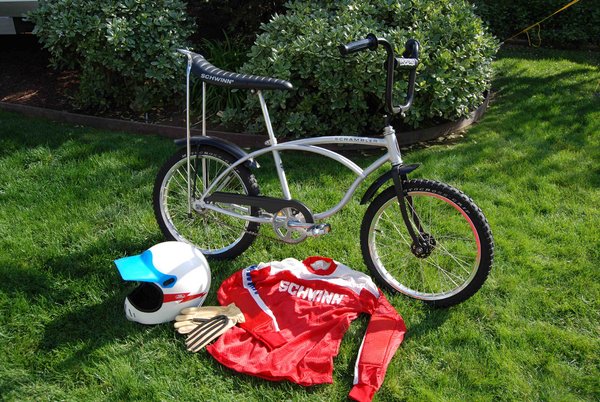 This is my 1978 Schwinn Scrambler, Serial # DP 510112. My collecting of BMX Bikes started with my son seeing my 1976 DG Racer II in the garage of my motherâ€™s house and saying what a junky old bike. Well that made me want to restore the DG and with the help and curse of E-Bay I was off and running. Once the DG was restored I found my self-wanting to collect all the BMX bikes that I had as a kid. After finding and restoring a 79 Mongoose Team Bike, I started looking for a Webco. After the Webco I started looking for a Littlejohn (1974-75) and a Dan Gurney monoshock (1974-75). Well I am still looking for these two bikes as frames to build up, so any help (with in reason and not causing me a divorce) would be great! This bike was a Craigslist find. I really thought a collection should have an early Schwinn. As a first generation BMX rider, I had a number of Schwinn Stingrays. I still remember the first time that I saw â€œOn Any Sundayâ€. The opening scene is just what I lived as much as I could including making the noise. Some times me and my friends came home from riding more horse than sore. I have also been collecting Schwinn accessories parts, real fun to put my son in them and say â€œa mini me.â€

More Bikes From DG-dean (18 bikes in museum. View all)