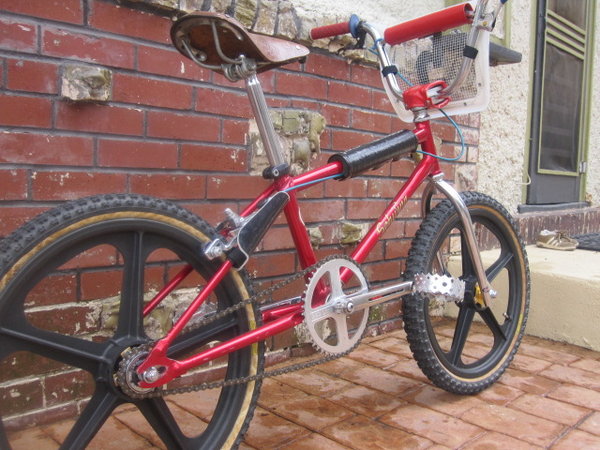 Mike prized bike took some time to convince hime to sell this one.

What can I say Start with the rims Skyways Gen 11 w/ campy hubs, mostly stock sting components leather ideal seat MP's choice. Bike came without cranks he had a loose pair of Campy track cranks nearly NOS that he intended on adding to bike but didnt not sure why. I do have those cranks but not bottom bracket so I added these flights instead, the Crupi pedals were mine which I added. Of the 50 bikes MP had in his garage none were in his house but this one and believe it or not a new schwinn chopper thing sure youve seen them had no interest in it. Forgot has a Pro Fit Neck which he was very keen of. Last time I saw MP was maybe 1 year ago he was going through some tough times but he stopped by on a 26 in specialized and wanted to show me his wheely skills. I live on a hill he went up two block got going full speed pulled up the front wheel and rode a wheely for two three locks full speed pedaling occasionally but really just using his brake wish I had got my camera haven't seen him since. Bit of trivia MP was a big Evil Knievel nut and collector as well as Matchbox cars he had a entire room custom built wall to wall packaged cars sometimes two and three deep. He is really a great guy as I've heard from others who knew him back in his race days.

More Bikes From BlackSaturday (28 bikes in museum. View all)