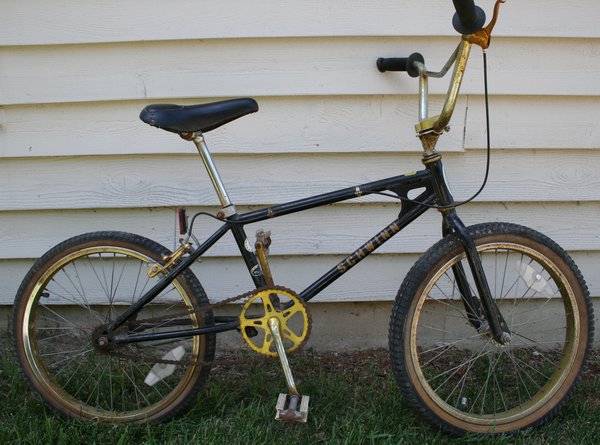 I picked this up this weekend pretty cheap. It's very dirty (I haven't had time to clean it at all, so it's really dirty in photos). It's also pretty rusty. Most of the gold stuff on the parts is flaking off, but some of the chrome underneath isn't too bad, so when I clean this bike up, I'll just remove all the gold and polish it up. It says it wants to live, so eventually I'll save it, but it's on the backburner for now.
-
It's quite original, even has most of the reflectors. Non-original bits are the ODI Mushroom grips, and possibly the brake lever. Probably the white pedals aren't original either. I don't know that I'll be able to save the wheels, but I have a set of yellow Lester mags that will look good on it. This bike will stay whole.
-
These bikes were made in Taiwan for Schwinn.

2022 update. I changed the year from 1982 to 1983, because according to the Schwinn catalogs, the Schwinn Thrasher Free was available in these colors (or red) in 1983, not in previous years.

(apparently I cannot change the title without contacting a mod)