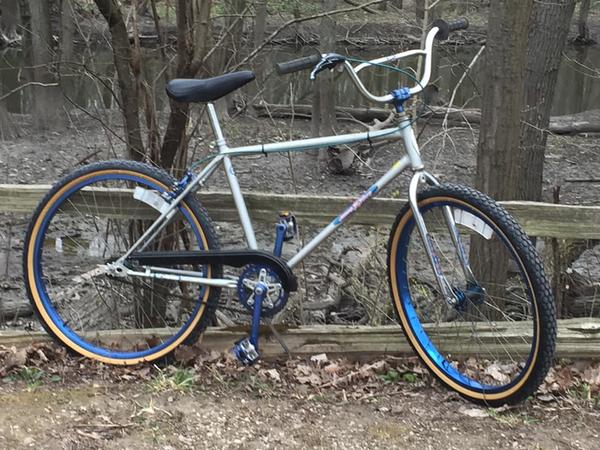 One of The Pull's greatest treasures!  When the Working Bikes warehouse guy texted me pics of this bike, the plan was to sell it for the shop as I normally do with the BMX bikes they take in on donation.  However, after looking at the pics of this (at the time) 100% original bike over and over and over, it occurred to me that I may never get another opportunity to purchase one for myself -- let alone an 18" single speed in all original condition.  Therefore, I bought it, and couldn't be happier!  The history of these Waterford factory classics is well-documented, and the craftsmanship that went into building them is evident.  All it took was me changing out the tires, tubes, and grips, and adjusting the rear cones and seat, and I was good to go.  Fittingly, our maiden voyage together was on a gravel road.  This bike rides spectacularly well, and makes me feel like a king!  BTW, since giving a model with a male name a female name just would have been weird, I went the androgynous route.  The last pic is the one the warehouse guy texted me.  As you can see, I only swapped tires, tubes, and grips, adjusted the seat, post, and rear cones, and added the Team Schwinn lever cover, chain tensioners, and zip ties for the brake cable -- which I'm okay with.  All the rest is 100% original to the bike, 39 years and counting.  For the curious, Old Majesty was the grizzly bear antagonist featured in Jim Kjelgaard's coming of age classic, Big Red.  It was one of my favorite books as a child.  Most CPSC equipment included and shown!

More Bikes From perront (23 bikes in museum. View all)