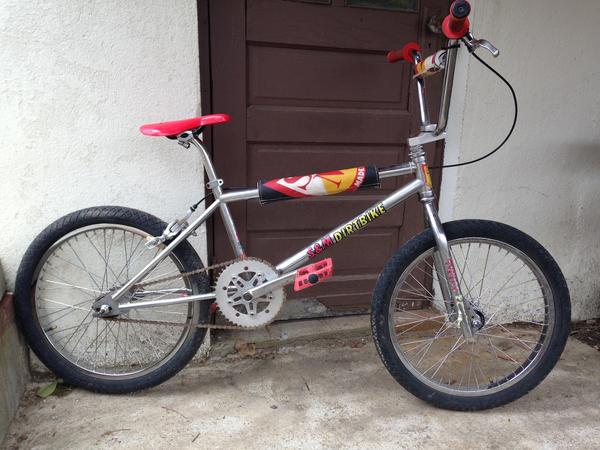 I still ride it. If I ever get time I'm going to clean it up and give it an 80s style build. I'd love to have some nice anodized red parts, and tanwall tires back on it. I had a lot more red on it originally.

This was my dream bike, all the parts came from Tony at BMX Country. I built it in 1989 and I raced it at Shoreham BMX on Long Island for what ended up being my last season racing. I was so excited to show up at the track with it for the first time. No one else had one. Of course when I got there some other guy had gotten one too. His was red and yellow, pretty sweet looking. There weren't a lot of S&Ms on Long Island back then. I used to get a lot of questions about it at the trails and at the track.

It's a mix of old and new parts now. Period parts from my original build still on it are; TNT neck, TNT two piece seatpost clamp, Profile cranks, and I think the Slam bars were on there originally too. Although I do remember having Powerlite aluminum bars with the bent ends on it at some point also. Can't remember which I had first. I also had a UGP numberplate on it but I haven't seen that in twenty plus years. Later additions are the Peregrine HP48s, DiaCompe Bigdog brake, Dirty Harry lever, padset, and the seatpost. Original wheels were 36h Araya 7x with TNT Derringer hubs, I still have them. I recently put the S&M P-Rail seat, S&M grips, Odyssey pedals, and Primo tires on it. The original pedals were Crupi square cage. I still have them but I'm too old to get bloody shins every time I slip a pedal. The plastic pedals are much easier on the shins plus they're red.

Hopefully I'll clean it up soon and get some more pics posted.