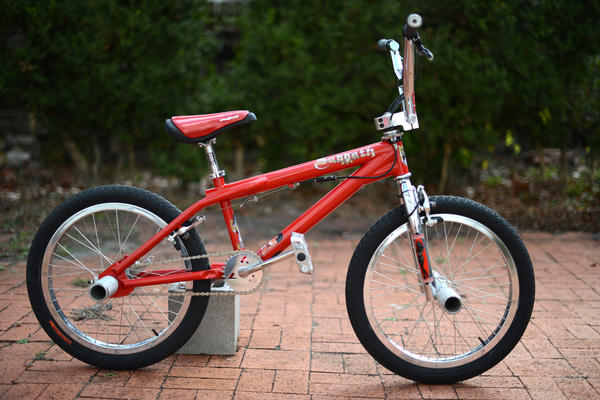 Sabbath Bloody Sabbath - Once my house caught on fire and the only things I grabbed to save was this bike and my wad of cash!

Rims: Primo Hula Hoops 48-hole front & 36-hole rear (laced up for me by Charley Long of the CBL's)

I used to ride flat on a '94 Hoffman Big Daddy (which is a story I'll tell in an upcoming Big Daddy post soon), which was absolutely a fantastic bike. Back in those days we would ride no matter the weather. If it was cold outside we'd find a parking garage to ride in. We knew all of the security guards in the downtown OKC area so all was good. Every November around Thanksgiving the ABA Grands would come to town and mostly we weren't interested in it at all, so we never went. On this particular cold and windy night my best friend Ron Harris and I were riding in an underground parking garage across the street from the convention center where the grands were being held. To briefly escape the cold we had decided to ride over to the convention center to check out if there were any vendors and see if by chance they had any freestyle videos for sale. We were allowed to bring in our bikes without question and made it to where the vendor section was. We briefly made our way around the section with not much interest in what they were selling until we came upon the S&M vendor. We talked for a while with them and either they didn't have any freestyle videos or we couldn't afford them. (My memory fails me.) Anyway, one of the guys introduces himself as Sean and asks us where we were riding. We said just across the street in a parking garage and and asked if he'd like to ride with us. Sean retrieved an upturned black bike that had been behind the booth which in fact was his prototype Black Sabbath. Sean was a really cool cat, he was obviously a league above anything we were doing but he talked with us about tricks gave us advice and let us check out his Sabbath and told us about how he had designed it. After that chance meeting with Sean, I saved up some cash and when The Bicycle Store in OKC got in their shipment of Sabbaths I traded in my Big Daddy and paid the difference to buy this red one and Ron bought a black one on the same day, which I now own and will be posting in the upcoming months. Thanks for reading, I hope you enjoyed my little story and the bike.

More Bikes From JHARJO (2 bikes in museum. View all)