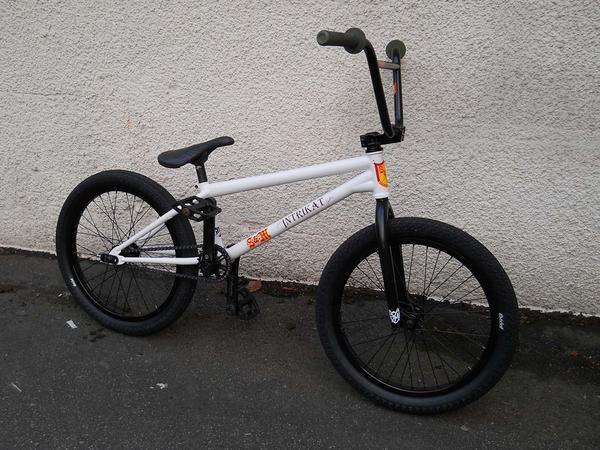 I turned 40 this year and decided it was time to have another S&M build that represented my personal idea of a perfect Bicycle Motocross bike, conceptually something that I'll use all the way into the final decades of my riding years. Other than my first bike, a Raleigh Rampar, my other beloved ride was my 1989 S&M chrome DIRTBIKE that I rode for years and years.  Once the head tube began to crack, I ended up getting a 2001 DIRTBIKE that I rode for years, then straying for a couple of years with strictly early 80s old school rides, but I still liked to ride heavier spots and the old school parts obviously don't all hold up as well as today's.  This year, I began looking at new frames and immediately was drawn to the more agile, responsive rides that acted like a smaller late 70s / early 80s BMX, but with a sharper headtube angle and shorter rear end.  Something like the Fit Ben Lewis frame.  The Mad Dog frame has always been a holy grail of mine with it's TT around 19" - so it was natural that I was drawn to the Intrikat limited edition frame with the 'Chad Dog' graphics.  Sharp headtube angle, short rear end, 20" TT, looks almost like a Kink Dave Young 'Fiend' and a 2001 S&M Sabbath frame (both frames I've always been a fan of), and again - the white color with the Mad Dog tribute graphics was too good to be true.  I built it specifically for street, smaller ramps, and smaller to mid size trails; all areas I've been loving with the small agile frame (I'm around 5'11" tall) that again, represents to me a late 70s style BMX with contemporary geometry and strength (and yes - I have been riding pegless and brakeless since the 90s).

More Bikes From 20TT_DIRT_FRAME (2 bikes in museum. View all)