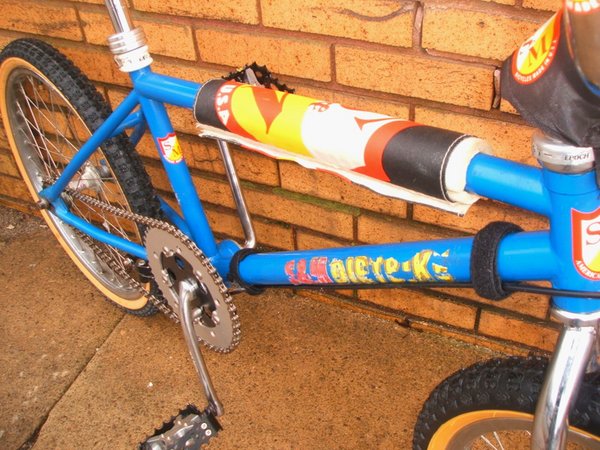 I ordered a blue Dirtbike in 1990 but unfortunately it was on back order and the shop had a black and chrome one coming in so I got that instead. Never even saw a blue Dirtbike back then in person. A couple years ago this one showed up on Ebay before the "mid school" craze and it never sold! So I talked to the guy for about two months and finally got the deal done. Unfortunately my S&M Mad Dog had to go, but that is how much this frame and fork meant to me. Finally got it pieced together. It still needs some Flights or Profiles and some early Slam Bars, and a tech 77 lever, but other then that, it is done. Parts run down:1989 S&M Dirtbike frame and fork S&M Slam bars DK XXL stem Tioga Beartrap headset with a GT Epoch cover( I've always liked the way the Epochs looked) Previously NOS Robinson lay back seat post Selle Italia Turbo seat Pitbull brake DC Tech 99 lever standard bottom bracket JMP? cranks Mongoose Pro Class Power disc Tuf-Neck chain ring cheapie pedals Araya 7x with GT hubs Kenda "comp III's" 1.75 rear 2.125 up front Jive grips and ends S&M pad set(with a few shots of the white S&M pad just for looks) New correct stickers coming(the downtube stickers are correct, but not the head tube and seat tube stickers).