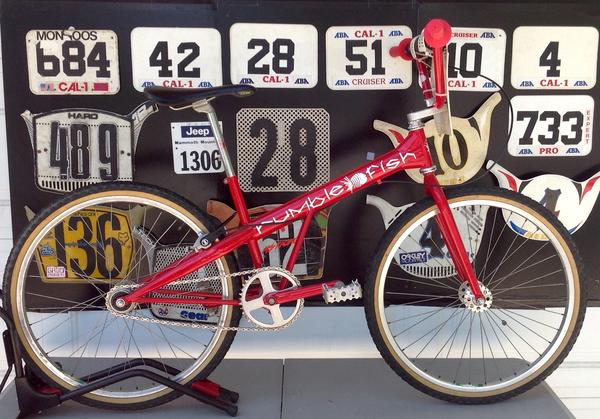 My main race bike, production frame & fork from first run #10 of that run. I won a lot of races on this bike and made more national mains then I didn't. I rode this bike everywhere. Dirt/street/race

I built this bike for Interbike trade show.
I would offer Magura hydraulic brakes as an upgrade.
I wanted to go to the Interbike show but could not afford to do it. So I called Magura and asked if they were
instead in having a Rumblefish Bmx bike with Magura brakes on it in their booth and they said yes.
I bought the bike and some flyers.
This was huge for me because tens of thousands of people go though the show over the four days.
The biggest thing that come from the show was a call I got a few days after the show.
I got a call from Bicycle Guide magazine and they wanted to do a story on my bike. They wanted to put it in the
"Hot Tubes" section of the magazine. Hot tubes is were they showcase high end bikes and boutique builders. (See photos)
Rumblefish bike have already been in Bmx Plus, insert photo on the cover. Calling it "the most radical Bmx bike ever".
With five page test inside. July 1991. Also project feather weight. Bmx Plus October 1991 with insert photo on cover "world's lightest bike upsets the top pros" plus five pages inside. There were some other small story's and pictures but the Bicycle Guide story was cool because they had never had a Bmx bike in their magazine. As far as I know this was the only time.
I sent the bike to them for pictures and so they could do the story, after getting the bike back I decided to make it my race bike.
I was still riding and racing the prototype and I hammered that bike. plus I thought it would be a good idea to be riding a production bike
I raced locals, doubles, triples and nationals. I put a lot of miles on this bike. In fact a year ago October I broke my right arm on this very bike at Yucaipa BMX riding with my grandson.
The geometry is taken from an RRS cruiser with one change. I moved the bottom bracket shell back. This shortens the rear end with shorter chain stays. Also you have more room when standing on the pedals. The seat tube on the RRS is really layed
back. Something like 68  degrees. Maybe not that far buts it's pretty laxed.
This bike rides like a 20 but with the 24" wheels it more stable.
This is the bike in the magazine and the bike I'm riding at coal canyon national 1992.