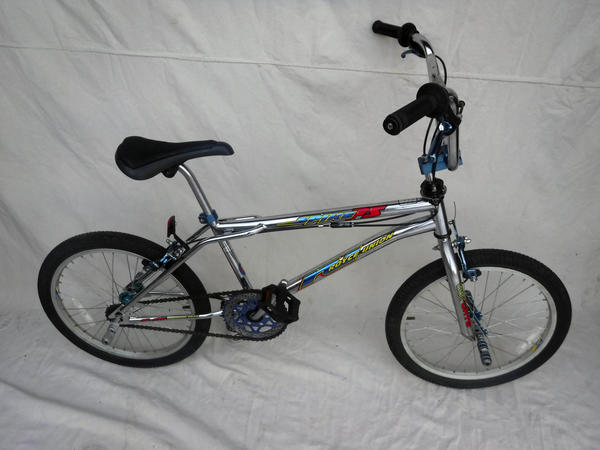 Department Store Bike that I was tempted to part out. But, I just know this was so many dudes first bike that I decided to restore it.

Royce Union has a long history in making department store bikes. The 1997 Spike FS was a first bike for a lot of kids who went on to better bikes- just like the generation of kids who started with the Huffy Pro Thunders and then went on to Redlines or Mongooses in the early 80's. In the 90's, Royce Union BMX Bikes were the bikes that looked like GT Performers or Dyno Detours from the 80's, but were accessible to parents who bought their kids their first bike at Toys R Us.

In 2016, few Royce Unions can be found as completes. Why? It has a lot of cool Blue Anodized parts- sprocket, brakes, levers, hubs, stem seat clamp- and a decent wheel set, bars, seat, and cranks and these bikes get parted like the Red Sea in a Crisis.

This "Spike" is OG except for the tires, which I just could not abide by, since they look like MTB tires and are just ugly. Long top tube, decent welds and pretty cool components, if it was still 1984. So funny how far behind the Dept. store bikes are from the rest of the bike world. This bike seriously has all the stuff that a mid range BMX had in the 80's including the anodized bits all-round