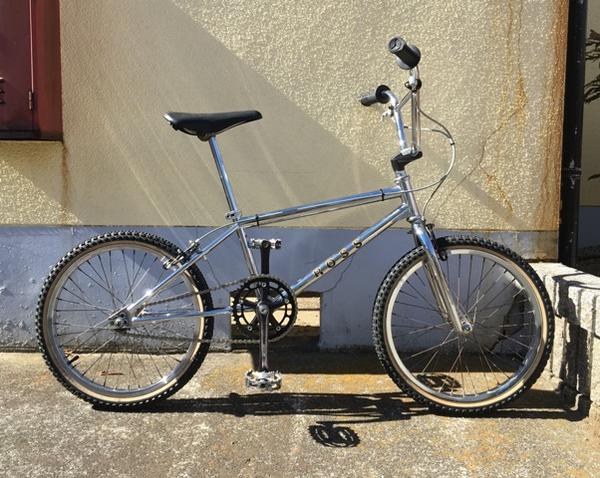 Not a Piranha or Pantera but an MX-Time!

Being based in Japan, I’m always on the look-out for interesting Japanese-made frames, which usually means from the Tange or Koizumi factories, so when I spotted this for sale on here, I couldn’t resist it! At that stage I knew nothing about Ross Bicycles but in amongst the Piranha and other completes they were better-known for was a short-lived, high-spec model with quality, Japanese components:- the MX-Time! There is a good test on the bike in the July ’83 edition of BMX Plus, and a picture of one adorns the front cover. There’s also a great advert from the Feb 1983 edition of BMX Action!! When originally found, the bike was complete and matched the spec of the bike in the BMX Plus test. Subsequently parted-out, I grabbed the frameset and 3-piece Takagi crankset, and had them shipped back to Japan. The frameset was made in Japan in September 1982 using Ishiwata tubing, which was also used for the first batch of Skyway T/As and the Procraft Ultima. It has oval tubing and similar dropouts to a Laserlite, which is no surprise as Tokyo Kogyo, who fabricated the frame (as denoted by the T-serial) also made some of the earlier Laserlites (and other Kuwaharas), including my own ’83 version. What sets this apart is the Redline-esque small gusset behind the bottom of the headtube. The bologna cut forks are also very cool! The overall condition of this frame including the chromework and welding is very good. I therefore wanted to do the frameset justice, and with most of the og parts gone and no desire to go for factory-spec, I decided to build the bike with a mixture of largely Japanese-made parts, in keeping with the spirit of the original spec, though with a few concessions to get the bike up and running. Here's the full parts list:- Ross frame and forks made by Tokyo Kogyo with Ishiwata tubing; Takagi Tourney AD cranks (170mm); Suntour XC-II pedals; Win Pro bars; Tange grips; SR MS-423 stem; Araike Jaguar seat; Straight cro-mo seat post (it has the remnants of a Diamond Back decal on it but think it's generic); Tange SC-2 seat post clamp; Dia-Compe 1020 calipers and Tech-2 levers; Rampar cables (made in Japan); Araya rims with Suzue sealed hubs; Cheng Shin tyres (20 x 1.75) with Kenda tubes; KMC chain; Dropout savers (Joe Buffardi specials). Thanks for looking!