These frames were build in because of an special memorandum of 2 Dragster race icons of the 80's.

Sometime around 1985 Sammy Miller & a Dutch rocktecar driver, Henk Vink, were building & selling a version of the Phazer BMX in Europe named the Rocket X-1. It was a knockoff of the Phazer ripped-off by Sammy & Vink. 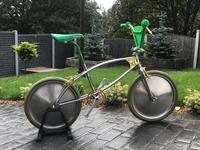