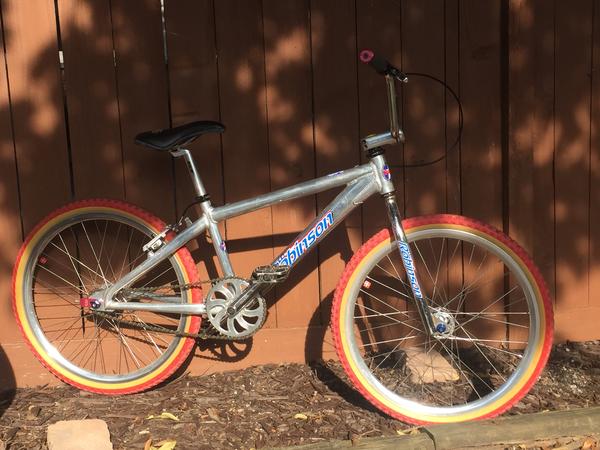 Inspired by a 1995 SNAP cover featuring Charles "Amtrac" Townsend, this bike is named after my wife and was basically 19 years in the making.  These are perhaps my favorite Robinson graphics and are the same ones as on Townsend's cover shot.  I knew they belonged on an aluminum Robbie, and that that aluminum Robbie had to be a 24" since I don't ride 20s anymore.  It is a 24", but feels like a 20", which should make it an excellent choice as a race machine.

The other part of the story is that when I saw it on Ebay a couple of years ago, I noticed that it didn't have the traditional Robinson badge welded on the seat tube like USA-made Robbies used to have, so I and others wondered whether or not it may have been a team rider's frame from BITD.  I told my wife I wanted it, and she said I could pick it up on one condition -- that I name it after her!

More Bikes From perront (24 bikes in museum — View All)