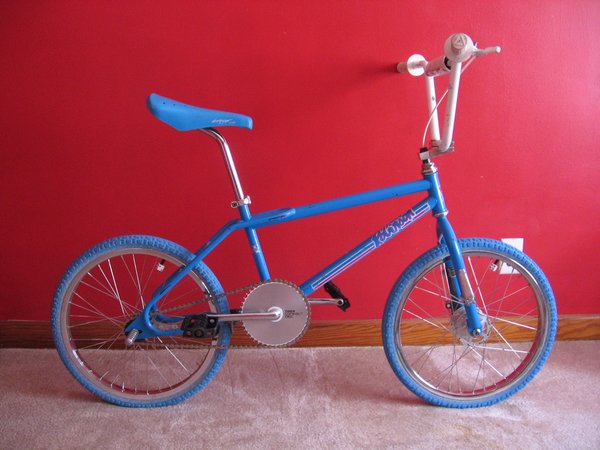 one of the rarest freestyle bikes out there

(this is the info i got with the bike when i bought it and after looking it over i think it is the real deal)... this has got to be the rarest bike i've ever come across, it was bought at a yard sale about 1 year ago, and i personally bought this from an old robinson team rider, so i got a pretty good story of knowledge of this super rare bike, that i along with a bunch of other guys never even knew existed. it is 1 of aprox. 5 made, it is a full looptail robinson pro frame,and robinson pro freestyle forks, no badge on this frame, it is an early one, robinson pro non knurled freestyle bars, tnt square edge stem,robinson laidback seatpost,cw seat,dia compe hinged seatpost clamp,chrome araya 36 hole rims with a sturney archer front drum brake, and a acs free coater rear hub,light blue gt freestyle skinwalls that i've never seen before either. these were not made for sale or production, they were only team issued, was very common to have made modifications on these bikes as time was changing, and these robinsons were primitive in the freestyle market. this bike has no dings,breaks,repairs and is in absolute survivor state except for the nos white ame grips. he said that after this bike was made for his use, they added cantilever mounts to the underneath of the chain stays, they tried it, but had no succes, so went back to the free coaster rear hub. i understand some of you might not understand the magnitude of the rarity in this bike,(3-15-2012).....  update from ken who rode the bike...Well back when I got it I was doing alit of shows.. Riding with people like Paul Delario and Joe Johnson. It's been so many years but I talked to a friend who was dealing with the Robinson racing team on the easy coast. He asked if I was interested in testing out a prototype freestyle frame they were working on. And of course I was interested the fame was beautiful. I was told they only made a handful of them. I had the brake brake td welded on by a place that did missile parts... The rest of the bike was just built up by parts.. Brett Marshall and rob Leclair had been riding sturmy archer brakes and they had such a good feel. ... Sadly my partner in crime Brett was picked up to do shows with Ringling Brothers. And my parents moved for work I ended up moving out on my own and had to lose my half-pipe. And over the course if the next few years I fell out of the sport. I still keep in touch with many of the riders from back then .

More Bikes From rusty r (6 bikes in museum — View All)