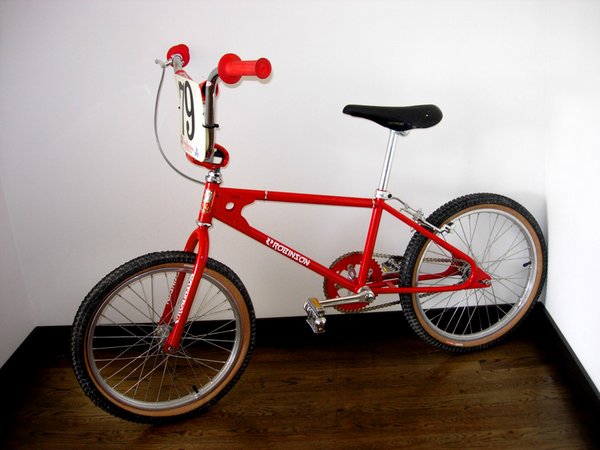 Admin Note: Get a full side shot of the bike.

When I was a kid in Bellevue, Wa., there was a racer who would fly through our neighborhood on a red Robinson. I was enamored with this bike - until seeing it, BMX bikes were heavy looking. Not his - it was lightweight and really trick. Everything about it was new to me. So, I restored my Robinson to match his to the best of my memory. The frame was all original, but badly chipped with a lot of surface rust. The forks were not much better. This frame looks like it never had a serial number. I stripped it to bare metal and had it powdercoated back to it's proper color. The bike it is modeled after had high flange hubs, but I wanted Phils on mine. His has an six-bolt MCS stem. Until I find one of those, I am using a pro-neck. Most of the parts are either NOS or really nice originals. All I need is a Robinson frame pad and this bike is complete. The number plate was found on ebay a couple years ago as you see it. It seems really appropriate, no?

More Bikes From 66alfa_gtv (9 bikes in museum. View all)