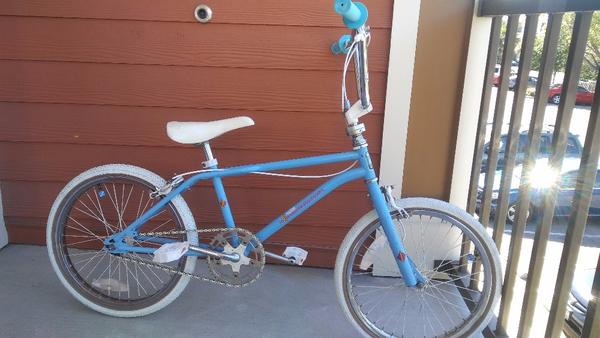 This is a copy of my childhood bike and I am so very grateful to have it again.  I got this bike the first time when I was 13 years old.  I was on it from morning til I had to come in for dinner.  I never was one for tricks but I could do a decent wheelie and ride no handed.  "Look Ma!  No Hands!"  I brought it indoors every night so no rust would get to it and since I grew up in a trailer park there were thieves everywhere.  I cleaned my bike down every night.  No rust ever came to her.  The only parts I ever needed to change out on my bike were tires because I would wear those

out at least once a year.  The next thing I knew I was moving out of state to live on my own away from my abusive parents but the bike could not fit in my car. I vowed the first chance I felt safe enough to go back to get it I would.  Unbeknownst to me, my little brother Ronnie parted out my bike and did other things with the parts.  He was very mechanical minded. My mom knew I was going to be upset so she tried to soften the blow but when I got him on the phone I screamed at him that I hated him for what he did!!!  I then hung up on him.  Soon after that, he died in a head-on collision with an 18-wheeler.  I never got a chance to tell him that I loved him that I didn't mean it.  I hope he knew deep down.  So finding this bike was very important to me.  Eventually, I would love to have a decal made that says "Ride With The Angels Ronnie".  I am also planning another special decal for Severed aka Trevor.  He was the one who grabbed the bike and over the next 8 months, he had one bad thing after another happen to him.  The poor guy could not win.  He was very ill with pneumonia at one point and he fell on some ice and broke ribs and a wrist another time.  He was afraid to come back thinking you all would lambast him for taking so

told him NO. The good people will understand that you have a life and my bike is not the be all end all.  He put a lot of his time and money into this project.  He even hand-painted the stem and the seat post clamp to make them look somewhat aged. He bought the tires and tubes, the brakes and cables, grips and the seat post with his own money.

More Bikes From TaylorRides (10 bikes in museum. View all)