Although never quite a legend of the pro BMX circuit, Mike Redman was still one of the fiercest competitors "back in the day". Redman was at that dirt lot "On Any Sunday" and so it was only a matter of time before Mike would one day design a BMX bike himself.

Redman Bikes is all about the Mike Redman experience, combining his wealth of knowledge with a vision for the future.  For years MRC (Mike Redman Concepts) and his Redman Factory Tribe have been a proving ground for some of the most talented young competitors in BMX,  many of whom have gone on to become some of the sport's top BMX pros-  among them, Pistol Pete Loncarevich, Eric Carter and X-Games medalist John Whipperman. And still, they return to Mike for the training and inspiration that have also earned Redman the reputation as one of the sport's premier trainers. But it's as the "Voice of BMX", announcing on the national race circuit, that Redman most embodies the true spirit of the sport.  Calling the last straight action, no one so completely captures the crowd and generates excitement like Redman.

In 2000, Mike partnered with long-time friend and rival factory TM Richard Huvard with the mutual goal of creating one of the most powerful race programs in BMX. Subsequently in 2001, they signed Yamaha Watercraft  as a co-title sponsor to create one of the most recognizable team monikers  ever in the sport of BMX, Redman/Yamaha WaverRunner.  Since then, the  team and its sponsors have indeed gone on to make BMX history,  winning back-to-back ABA World Champion and National #1 Factory Team Titles. 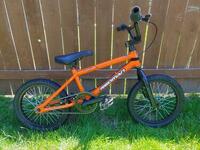