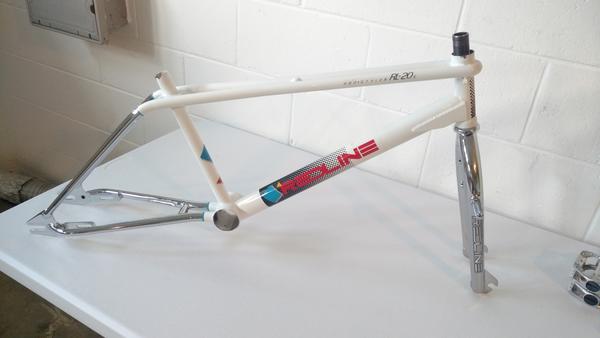 I bough this very nice survivor frame set from the first owner , Original paint and decals . The guy i bought this from just put it together for display Then kept it in his storage for a long t

***SOLD,SOLD,SOLD,SOLD***
The person that I bought this frame set told me that he bought it in November of 1985 , The frame comes with the 85' paint job and decals the 86' comes with a black paint in the bb shell and comes with a different decals . The serial number no have letters just numbers and starts with 5130 it is a Taiwan transition frame they used them serial numbers when they were leaving Japan and starting the Taiwan manufacturing in 85' ,I would say that transition frames are late 85 models. the decals  and paint are original .
I just Add my favorite parts .
Redline forklifter bar and stem.
Nos Elina flyte-tech seat .
Like new just re-chrome peregrine super pros .
SAE fluted seat post.
Like new MKS pedals .
Redline bubble font chainwheel.
Redline 401 full wrap 3pc. crank.
Suntour broken arrow clamp .
Nos D.C Tech-4
D.C 880 brake set.
NOS D.C cables from the 80s.
Oakley B-2 Grips .