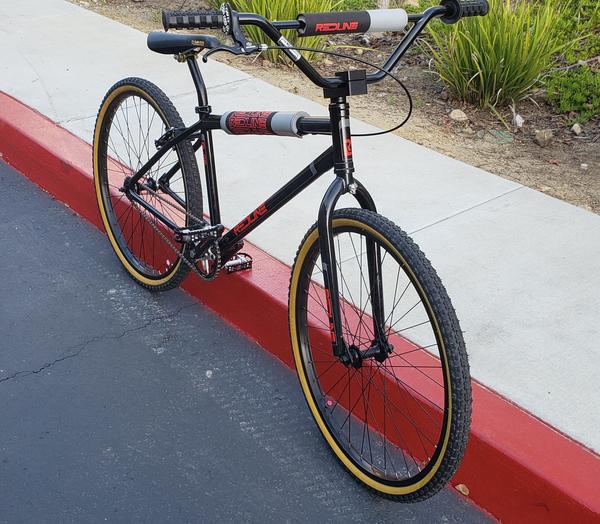 This bike started off as an out of the box, ready to ride BMX cruiser but after a few hours of "studying" the bike I realized that it had to be pulled apart and reassembled to my liking. I thought, "what would Stompin Stu do with this "canvas" of a bike?"Don't get me wrong, straight out of the box this bike is pretty rad and handles great but to me there was a matter of taking a stroll down memory lane and stopping by that bike shop where they knew you by first name and were treated like family. While examining the PL I began to think about the school folder I had in 1983 with a picture laminated on it of Mike Buff on a PL-24 catchin some crazy air off a 1/4 pipe. So I set out to revamp the 26 using that PL-24 as a guide. Off came the handlebars and on went the 40th anniversary Redline Flight Pro V bar only to be later replaced by an Al's Rapid Transit bar. I ditched the Redline Hollow Point stem and installed a Knight Bike Co. Ruff-Neck stem, chucked the Redline grips in favor of some Air-Uni Hand Grenade 2 grips. I took off the seat and post with clamp and replaced them with a Viscount Dominator seat, a Black Ops layback seat post and a 28.6mm Dia-Compe hinged clamp. The Tioga Powerblock tires were pretty cool but cooler were the Duro 26 X 2.125 skinwalls I traded them for. The "hum" these tires produce with every pedal stroke is like music to my ears. It's almost like a growl. Needles to say, I am very happy with the final product. I ride this bike a lot and it gets complimented every time and is especially a hit with the old school BMX aficionados. I think this is a bike that even Stompin Stu himself would do a double take on. So to Mike Buff and Stompin Stu, thanks for the Inspiration and the memories. I just added some updated photos. The Flight cranks were changed in favor of the 2.5 piece Redline Flight cranks powder coated black, a Neptune spider and a Mirage 39 tooth chainring with MKS pedals. After these changes I added a Bullseye v-brake with a Dia-Compe lever.