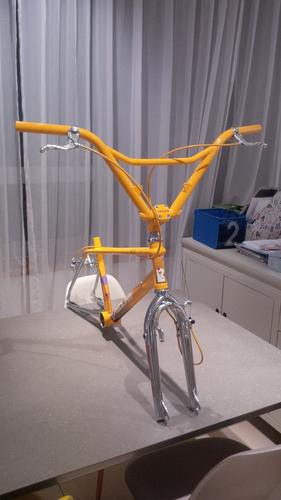 My favorite freestyler in my favourite colour

I bought the frame and forks on eBayUK earlier this year in turquoise. I'd bid and lost on this frameset before; the seller had relisted it as when the first buyer came to pick it up, he saw something else in his collection and wanted that more, so the seller kept the RL and re advertised it 4 months later. The listing ended late on a Friday afternoon, so I got it a lot cheaper than it went the first time.

When the frameset turned up I gotta say I was pretty disappointed with it. The turquoise was a shade darker than the images I had of them. There was half a seat tube stuck in the frame, rattling about at the bottom of the seat mast. The powder coat, advertised as being by C4 Labs, wasn't very smooth and looked really thick and drippy.

I decided after weighing it all up that I'd go for a colour change to Hazard Yellow which was my preferred colour choice. A couple of emails followed and I dropped the frame, handlebars and stem off to Superbike Dan in London UK for a recoat. Dan as everyone said was really helpful but called me after a few days later saying he was having problems with the powdercoat - it wouldn't come off despite several attempts with Dan's usual hi strength stripper. The bars had stripped off easily. Talking it through, we realised that the powdercoat wasn't the best of job's, as it has been coated several times to help take out some of the bumps left from when the frame had probably rusted or lost a chrome plating in several places and almost felt baked on. I agreed with Dan, the best thing would be to find an alloy wheel refurbishment company who have stronger chemicals to strip it.

Several phone arounds in the London / Essex area and I only found a single company in Rochford, Essex, who said they could do it for £25. Promising they could keep the chrome of the rear half I dropped it off and arranged to pick it up the next week......when I picked it up I was totally bummed out because they didn't dip it, they glass bead / sand / media blasted it and stripped everything back to basics. They took all the powder off and most of the chrome and then sprayed it over with a coat of god knows what. So, after getting nowhere with tehir owner, I put them behind me and arranged to drop the frame off to London Chroming in SE London for a rechrome before powder coating. They had it 4 weeks and when I picked it up I was stoked with it - the best chrome and polish I've ever had done. I've had some flights and handlebars rechromed by a company recommended here on RAD but was never pleased with it, found the chrome plate flaking off after just two months. Can't recommend them highly enough - when you walk in their entrance it's the holding area for their work and they had everything, racing bike frame, motor bike bits, car bumpers and grilles, trophies and a huge airplane propeller.

Once the chrome was on it was back to SBD for the Hazard Yellow. Picked it up after two weeks and nearly pissed my pants with how good it looked. SBD was as humble as ever, not taking a penny more for his hard work and advice. Top fella.

Had a set of decals posted over from AJK Bikes, applied them and decided to build up as the Redline adverts in Freestylin' from the '85 era. Redline used to sell the RL20ii as a "Combo", consisting of "matching forklifter stem and handlebar, and the new Dia Compe FS brakes with matching cable housing and detail lettering". I managed to source some identical water based hobby enamel and detailed up a minty pair of FS880's and used some NOS Dia Compe Mustard Yellow brake cables to finish it off.

I've sourced all the parts now and am getting ready to build her up, just need to decide what wheels and tires to go with and whether to go yellow over black with the B1B's or stay grey over black. The yellow doesn't match the frame and seat colour and looks like its clashing, so I'll probably go grey. Wheels might be satin anodised Peregrine 48's with Suzue/Peregrines hubs or chromed versions with sealed Peregrine hubs/Super pro's. I also have a pair of white and a pair of black peregrine masters, but I think they look too heavy on the twin tubes Redlines.

The build is gonna be pretty easy, so I will post up more once I'm finished.

More Bikes From wildwood (6 bikes in museum. View all) 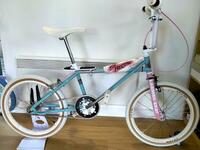