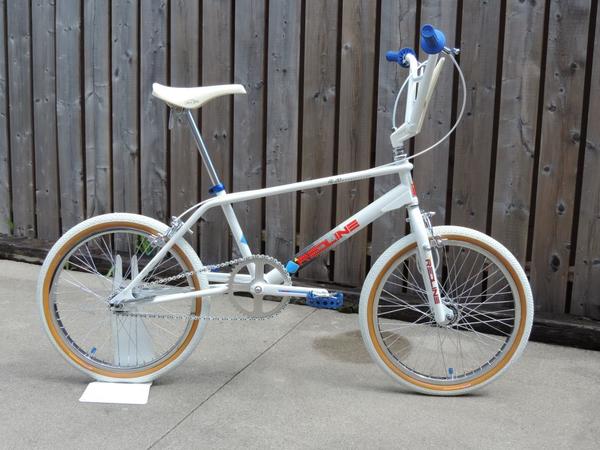 One of the rare original first 250 produced with full paint.

This was eBay find from OZ.  It was matching FF from very rare batch of first 250 RL22s made. It had no surviving paint but some traces of teal it was perfect candidate for show build I dreamed of in Snow White . It's story is very cool. A member of museum OZBIKES regularly searches out old parts in his native Australia when he came across this FF on side of the road. It was decaled with stickers from old bike shop that had long been out of business prob since early 90s. He assumed it would have sat in window as display slash advertisement for the shop. Thankfully the dry hot weather preserved this relic. To his surprise it was stamped redline and he immediately recognized RD serial as something special. Next stop eBay where I was lucky enough to land this beauty. Rl20-iis were very rare in Aussie in 1985 very few were imported and an 84 well I can only assume this was a demo display piece given to a prominent BMX shop BITD to show off the product. I'm also going to put this in here. The fork peg bosses have threaded nibs which came with them which suggest that some type of peg screwed into this. Most 84s that have turned up had hex nut fork peg that may have been an international thing or early version that was discontinued shortly into production. They do exist I've seen them I just don't know a lot about them. I believe my ride had these. Yes I still have nibs. ( peg info updated )

Hemi455 he built this bike with such patience and brought it to life! Great person who loves his bikes . After everything he did for me he responded by telling me " it was honor to build this piece of history" kick ass Pat!!! Thank you.

C4 labs for amazing restoration work they are best out there hands down !

BMX museum member MFun hooked me up with a near impossible to find nos white elina flyte tech seat. Great member with some of best surviving RL22s on the planet. Thanks Steve.

Member DIDI for connection to rarest Redline pegs I know of!!!!
OZBIKES for selling me FF and shipping From Australia to Canada
So awesome!

2009HDSG for the unreal restoration work on these rare hutch cages. The time put into prep and cost to match anno far exceeded any chance of profit for this bro. He wanted to contribute something special and clean to go with this build. He delivered. Thank you.

Caleb who everyone knows parted out his hazard yellow 84, and I got a couple special pieces from him to bling out my dream machine. A set of NOS Super Pros ( best Wheelset ever )
And autographed original freestyle forklifter plate . RL Osborn signed this as most know he does not do that anymore so it's a treasure to my build. Great member with info and parts on other builds of mine as well.

Finally I dedicate this bike build to my late father who lost his battle with cancer. He taught me how to ride a bike and fixed most I broke. He will always be missed. Love Mile

More Bikes From Shiznitme (5 bikes in museum — View All)