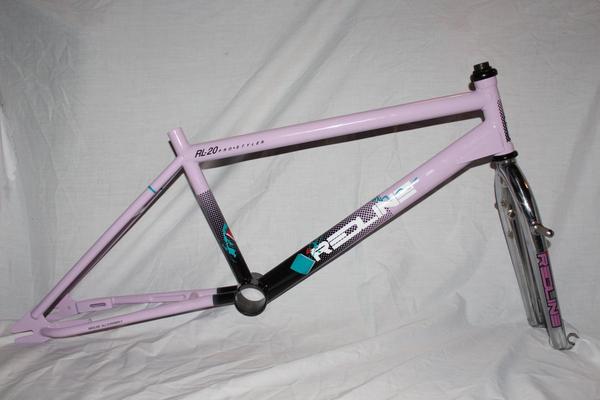 SOLD  - Bought this bike in rough shape. Was originally radberry but most of the paint had been stripped off. There was damage to the bottom of the chainstays near the BB, looked like damage from a bash guard. There was also some damage to the serial number and oval REDLINE stamp. They were hard to make out. Unfortunately during the restoration, the scrape was filled in and damage was fixed, and it has become unable to read :-( Good thing I wrote down what I could decode before It got fixed. Anyways, the paint was matched and confirmed to a survivor radberry 20II and a paint code was assembled. Decals are re pops from frog. Forks are not so hot, and could use a good re chroming. Serialed as an 85 production date, (we are sure it is a RE and not an RF, but was very difficult to read) but with the paint that was on it along with a chrome rear and one blue separation/transition line decal was still evident on the seat stays. Rear was painted as the chrome was somewhat shot.  I still have the original reverse headset for this. Thanks to great friend and painter ToBigToRide265 for helping me restore this thing!

More Bikes From immortal (8 bikes in museum. View all)