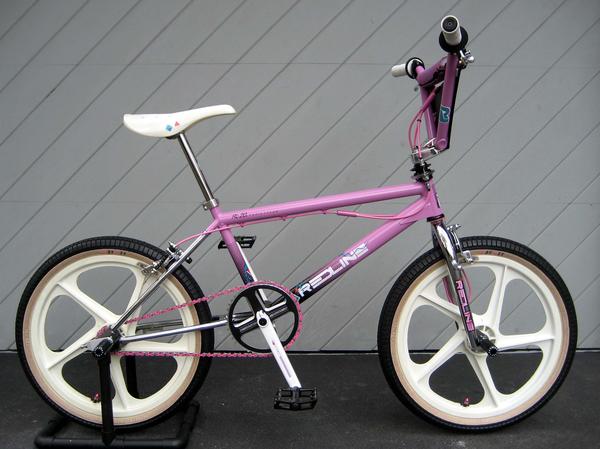 This little Redline has had an unloved life until now. After much work, and expense it is finally appreciated and will never to be neglected again.

First a little history on this bike

It was bought new by my friend, he was a little late to the party as my crew had already been riding and styling for some time when he got it, and he was never a real bike guy he just wanted to be able to hang with us so he got his mom to get him a Redline.

Three problems with the scenario:

Eventually life happens and the grand biking days slowed down, it was back to my core guys and my friend and his RL-20a disappeared.  Years later it reappeared at my buddyâ€™s with the Trickstar house stripped of most of its parts and partially stripped of its paint.  Seems my other friend owed him money so in lieu just gave him the bike, which he wanted for the Radberry Peregrines for his lavender Hutch.

Fast forward a few more years, none of us ride anymore I am visiting my friend, his Hutch tossed in the corner and the Redline tossed like garbage on the floor, I said let me have it...he said what for, I said dude itâ€™s a Redline, he said you have an RL-20II what do you want this crap for, I said maybe Iâ€™ll use it to trash around instead of wrecking my good bike.  I took the bike home and it sat for a few more years.

One day while cleaning up my shed I re-found it, at this point I hardly even rode anymore, and none of my friends did,  so my  intention was to strip the rest of the paint, leave it chrome put on the then new-school (midschool) RL decals (which I have NOS somewhere) and sell it.   Never got around to it, about ten more years go by, inspired by the fantastic outcome of my other Redline and the spare parts I had, here it is, reborn, and better than Redline Engineering ever intended it to be.  Itâ€™s been in my possession the longest, and has been well preserved in a heavy black contractorâ€™s bag.  The chrome looked very good where it counted, the rest cleaned up nicely to like-new condition.  The dropouts look fantastic, and to my joy, the original front brakes were on it as was the original headset!

Considering this was a â€throw-awayâ€ bike I have spent an inordinate amount of time and money in its restoration that is doubtful I will ever recover should I sell it.  However, I have no plans of selling it and the results are stunning and compliment my Mack-daddy RL-20II exceptionally.  I was going to make this a very simple build no exotic parts, one piece cranks, "cheap" Redline bars etc....well you know how these things go and have a tendency of getting out of hand....at least I didn't spring for vintage 401 Flight cranks!

Thanks to Facebook I now am in regular contact with many of my old friends including the original owner, and he is taken back at how good his old Redline looks, and calls me the great BMX savior.

I am very happy with the outcome and the response, and for having rescued a great bike with a rather sad and neglected pastâ€¦.rest easy little Redline you are safe now.

More Bikes From XJguy (2 bikes in museum. View all)