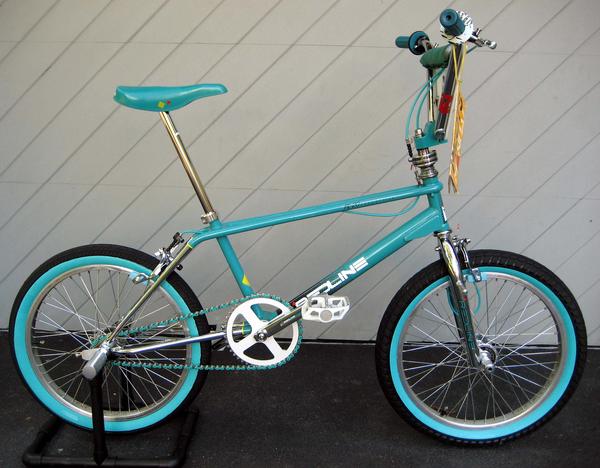 We have here what I believe to be the finest, most elegant freestyle bike ever made. From the day I saw it I had to have it, and fate made it so.

The Rolls-Royce of Freestyle bikes

This Redline is my second, my first being a 1983 or 84 600b that my dad bought for me after my AMF Roadmaster Hawk left both me and my brother with permanent damages, hospital bills and much pain and suffering.  My intentions were to start racing.   I had my ABA registration, my decals, number plate and race bike.  This was about the time that Freestyle was really popping.   Race tracks were far from where I lived in Rego Park, Queens NY, my parents were not very keen on driving me to NJ to race, and were fearful for my safety since I was notorious for getting into bad bike accidents.

When I saw RL Osborn with the beautiful white RL-20 prototype my mouth droppedâ€¦..I had to have it.   But it was not going to happen, my 600b was like new and my dad was not about to drop a few hundred on yet another bike.   So I began to slightly modify my 600b to be more in tune with the street riding I was doing.   I swapped in a Forklifter stem, aqua colored brake cable, aqua Z-rims with white spokes and aqua sealed Suzue hubs (store owner told me they were the only set in existence at the time, he got them at the bike retailerâ€™s show), Tioga sealed BB, Tange sealed headset, Suntour XCII pedals, MX 901 brakesâ€¦I was slowly but surely changing over to street.

But I was not done with the idea of dirt and racing quite yet so my knobbies were staying on.  When Tioga came out with white Comp III I had to have them so I went to the best BMX bike shop in the area, where I had bought my bike, took it inside and left it by the store entrance to be safeâ€¦.bike theft was rampant in those days.   Went to the counter at the far opposite end, bullsh!itted for a while; they all knew me since I was always in there drooling over new stuff.  Made my purchase and started to make my way back to the exitâ€¦.wait where is my Redlineâ€¦..I run back and ask if they were pranking me they said noâ€¦.I yelled someone stole my bike!!!!   I ran outside and see some dude power-cranking  across the Blvd.   I never saw my beautiful Redline 600b again.

That bike was my world, I felt like someone close to me had died.   I was depressed for a while; my dad didnâ€™t really seem to care since he felt I spent way too much time on a bike anyway.  My brother then received a Kuwahara Exhibitionist.  Since he was three years my junior and now did not have his big brother to ride with his bike was sitting idleâ€¦.. I seized the opportunity and started to use it.  Freedom and fun againâ€¦.but it was no Redline.   As cool as the Kuwa looked it rode small and the geometry felt very weird to me.

Not too late thereafter the RL-20II was revealedâ€¦.this to me was and is the ultimate Redline.   Seeing RL Osborn in front of the Arc de Triomphe with that amazing machine made break out in a sweat.   I went to the bike store and couldnâ€™t believe my eyes there they were in Radberry, White, Hazzard Yellow and the object of my desires Turquoise.   But it was $250 just for the frame!!!! That was more than my 600b complete!   It was the most expensive BMX bike you could buy at the timeâ€¦..acquiring it seemed as likely as winning Lotto while getting struck my lightening.

Well to cut this long story short I begged and pleaded for many weeks, and he cut me some deal having to do with school.  He tried to renege but my mom held him to it and he finally broke down and bought me the bikeâ€¦.that is this bike that you see here today which I still cherish, and value, and care for.  It has had many part changes throughout the years but itâ€™s still an RL-20II, the ultimate BMX bike.

Why these parts were chosen.

At this time in its semi-retired state, there are only two things I would change to call it perfect, that would be Forklifter Freestyle handlebars (maybe painted like the original combo set) and Peregrine Super Pros.

How and why has this bike survived.

I was conscious of how the axle nuts/pegs dug into the dropouts, I also realized that the problem was that the nut and washer would spin against the chrome thereby cutting into the finish.  I experimented with bunch of things including aluminum nuts and pegs, but they all slipped.   I finally realized that a chain tensioner would be stationery and would help locate my rear axle, require me to tighten the axle nuts less, and protect the chomeâ€¦.so that is what I did, this was around 1986.

I have always been a very critical and anal person.   As a small child my things were always in great condition, and I sought to preserve them.   My bikes were no different.   I realized early on that if I were to really use this bike it would get trashed in no time, so what was I to do?   I figured that if I had a protective film covering the whole bike that was removable, I could use my bike hard and not fear damaging the finish.   Long before 3M started to cover cars, I was covering my Redline.   I used several layers of clear heavy duty packaging tape and basically wrapped the entire bike, chrome, paint and decals.   Every 6 months or so I would do a major overhaul and remove all the scuffed up tape and recover it.  It was similar to what we now do to cell phone screensâ€¦.but I was doing this in 1985 at the ripe old age of 14.

Another thing I did to preserve the bike was plug and seal every single hole, this includes the holes located inside the bottom bracket tube, and head tube as well as fork tubes.  I sprayed the inside of the tubes liberally with WD-40, allowed to dry overnight then using cork plugs and or silicone sealant to close everything up.  I also sealed some of the rust susceptible welds located by the rear dropouts.   With these mods I had no fear of getting caught in the rain or riding in the snow and slush.

As you can see all these steps paid off very handsomely.   While there are RL-20IIs out there that have been restored to better than new, you will be very hard pressed to find any that is original was used hard for many years and is in this great a shape.  I love this bike and am so glad I have held on to it all these years even after everyone told me to just get rid of it.  BMX Museum has inspired me to bring it back to its full luster and I am grateful for that.

When the RL-20II was released, one of the BMX magazines did an article on Redlineâ€™s new coating technology that was being implemented on new frames, specifically the chrome and painted Redlines.   The article stated that the process is called powder coating, and that the finish was harder, more durable and able to stick to the slick chrome surface of the new Redlines.  However my bike, does not appear to be powder coated.  It instead appears to have a modern multi stage paint job.  There is grey primer, a color coat, and then a clear coat, from the factory.

Special thanks to Tommy D for helping me with the pad and graphics!

More Bikes From XJguy (2 bikes in museum — View All)