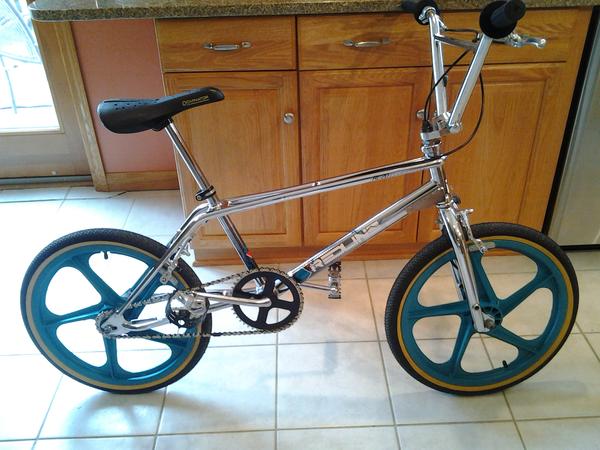 This bike gave me a hard time . I couldn't decide teal or hazard yellow but finding the right decals for a chrome RL-20II with hazard yellow on them became more difficult than I ever imagined. I was able to get some nice decals from caleb so I went with the teal. So I guess I have some hazard yellow Peregrines if anyone is interested LOL. Most of the parts on it are from members here and some or from my stock. The Peregrines were from my childhood 600c and I wanted to find a bike for them that I could ride . What better bike than a RL-20II. I found the F+F on ebay with every intention of powdering it ,but after uncovering the chrome there was no way I could cover it again. This came out better than I expected , I have the all white 85 RL20II I got from my friend and the 88 kiwi RL-20II I built for my son , so I considered this one to be all mine. This is probably the bike I would love to have built as a kid, but as most of us, no funds.  Hope you like it!!! I will try and get some more pics