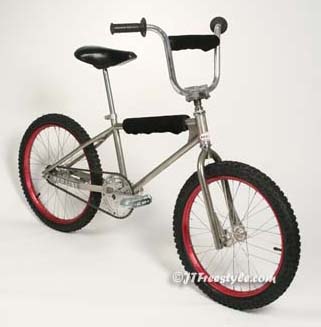 My Schwinn Stingray was cool but once I saw On Any Sunday in '72 and knew that other kids were BMX'ing I had to get a real BMX bike! My local bike shop stated that this motorcycle company was producing BMX frame and forks. Being involved with MX I had to get one. My Mom had a fit on how much a frame and fork was then!

The bike was awesome to ride and indestructible! The geometry, gusset, and beefy square tubing made this bike so aesthetically gnarly! The frame and fork were replaced in '78 when I switched to Torkers. It's been sitting at my Mom's house until 2005 when she wanted to clear out my bike stuff. Built it up with the original Redline prototype stem, Schwinn seat post clamp, and Mesinger seat.

So here it is!