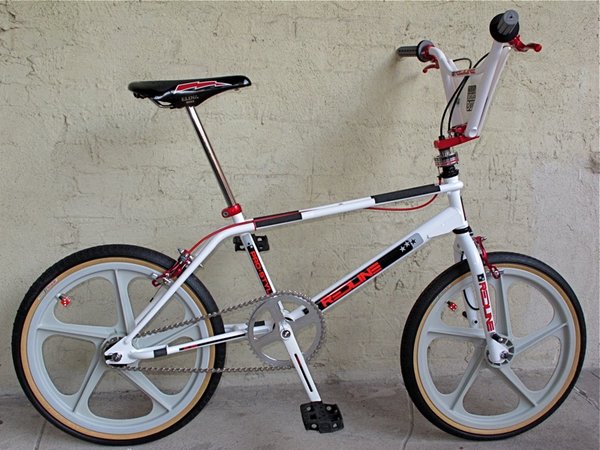 Here is my RL20II, built up as an RL Osborn tribute. It started with the F/F of one the most popular freestyle bikes from BITD, which I purchased (from Hboost) already powdered and with decals applied. When this F/F came up for sale I immediately had ideas running through my head as to how to build this up. I set out to accumulate parts to best mimic the famous photo of RL stylin' in front of the arc de triomphe paris, France. I'm happy to say that I pretty much accomplished what my mind saw at that moment.

I owned an original all turquoise RL-20II BITD which I truly loved. That bike fit my stature to a T! It was probably a result of seeing the photo of RL in Paris on this bike that I had to have one. I loved Redlines and this one with the 5" head tube, ideal geometry, wrap around double top tubes and smooth looking built in frame standers at the chain stays, was perfection to me!

As with most of my builds, I utilized a combination of used/restored and NOS parts. As much as I wanted to mimic RL's bike from the Paris photo, I had to make some changes to highlight some colors and to suit my personal tastes. I went with the very rare Silver/Grey Peregrine Master graphite wheels which I got from my good friend Kevin (Kmpap). Instead of the original chrome flight cranks I first had on here, I decided to use a white pair along with mint condition graphite-X pedals which I got from Domphippso. I had a couple of parts polished and then powdered in Candy Apple Red by Chip at C4; those parts included the Hutch stem, Nippon calipers and the Suntour seat post clamp. I originally had a NOS MX-1000 on the rear and an FS-880 up front, but traded the MX set with Scott (13thoni) for that hard to find forklifter FS plate! I love how the white inlays of the Nippons pick up on the white F/F anyway. Those are dated DC cables in black (front and upper of rear leading to rotor) and a dated DC cable in red from the rotor to the rear caliper. I got a sweet set of grey peregrine brake pads from a member here too! The Elina seat came from my buddy Tony (Gunluva) and I had some decals made in a deeper red (without the orange tint) and a light grey outline. The Comp ST's came from Paul (Bronxstyer) to round things out. All in all, she turned out as great as I envisioned and hoped. I hope you enjoy this tribute to one of the greatest freestyle riders who helped pioneer the freestyle side of BMX!