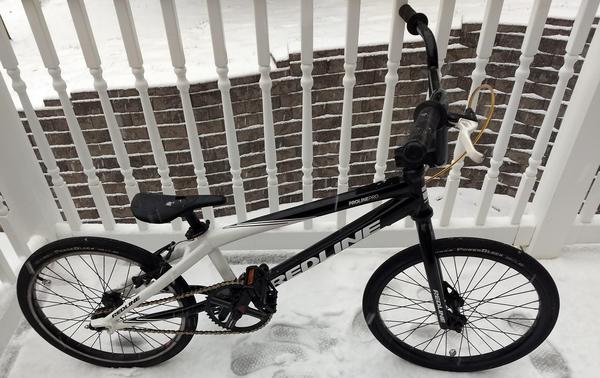 Here is Max's (Shuggy's) (former) race bike - a 2014 Redline Proline Pro.  Overall, this is a pretty nice, light, race bike for the price.  His first race bike was an old Robinson Rebel that we got on the cheap. Once it was clear that BMX racing was not a temporary thing, we decided to upgrade to something a bit lighter.  This bike has done quite well for him.  He likes to keep the bike in his room and I think he would sleep with it if he could.  Recently, we restored an old Robinson Ruckus for him to use around the neighborhood.  Hopefully, that will save the wear and tear on the Redline.

Shuggy is already planning his next carbon fiber bike build.  Hopefully, I will be able to convince him aluminum is better, especially on my wallet.  He also has plans to open his own bike shop someday called 'Shuggy BMX'.  So, Planet BMX and Porkchop - beware, Shuggy is coming.

More Bikes From jpiseler (9 bikes in museum — View All)