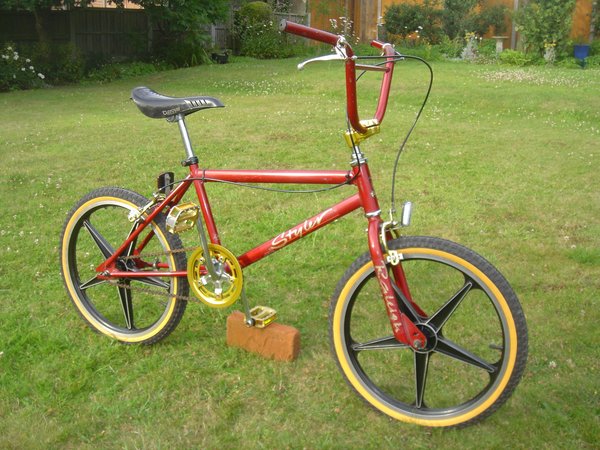 From the "Burner" range of bikes

Scored for me by my dad v cheap as donor bike at a local car boot sale as parts on it wanted for other projects. The Stylers are not very sought after bikes, despite being identical to the MK2 Raleigh Burners, which are very popular here in the UK.

Had some very nice original parts, all in almost "mint" condition including Gold Suntour Power Stem, gold Sugino chainring, sugino cranks and spider, Gold SR Aluminium pedals, Good Aeroyal seat with all decals still present. I don't think this bike had much use.

Frame, forks and bars and majority of spec identical to most other "standard" MK2 Burner's. This one is unusual as it has the "R" cut outs in rear drop outs, as MK2 burners.  I'm told most styler frames did not have these. Main tubes are Cro-Mo. I also heard that Raleigh re-marketed the MK2 burner as "Styler" from '85 to boost sales and cash in on the growing craze for freestyle bikes in the mid to late 80's, but chose not to invest in any new tooling or frame set to keep production costs low.

Picture shows bike with 70's cast Aluminium Lester mags, I put these on as the bike was missing the original rear gold Araya wheel when I got it.