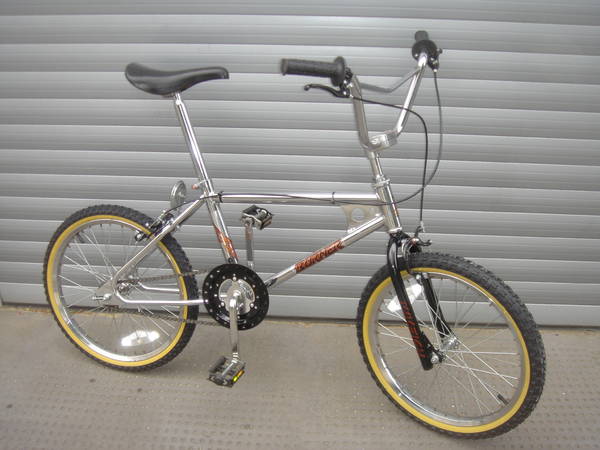 Here we have my MK1 "Chrome" Burner, this model was added late to the Mk1 Burner range, appearing in the second addition of the 1983 Raleigh "Action Bike" catalouge, which showcased "model B" Mk1's, which included the new "Chrome", "Mag", "Super Tuff" and "Night" Burners.  Model B's differed only in that they were new models introduced to expand the existing Burner range with alternative cosmetic detailing and some diferent parts such as new Mag wheels, the frames etc. were as existing models. In 1984 the completley revised MK2 Burner range with "Aero" profile tubing replaced the MK1, so the Chrome and other model B MK1's were only in production a relativley short time. Although not exactly the best BMX ever made, Raleigh Burners now have cult status here in the UK, they were the first BMX many kids here had BITD, and were available in most bikes stores as Raleigh was probably the largest and most established UK manufactuer of the time with a comprehensive dealer network and also marketed bikes through home shopping mail order catalouges.

I wanted to build up an example of a Mk1 and got this off Ebay UK in June 2009, as an incomplete "project", a mix of odd parts that consisted of the frame and forks, a crude unbranded steel 4 bolt stem, nice late 70's Mongoose chrome bars (now on my Motomag), Tange headset, original rusty & badly scored seatpost, original single piece crank set in good condition but with bent chainguard, Tange bottom braket & original chain. Turned out to be a very clean frame with original decals & no rust, dings or repairs! Also came with red aluminium Victor platform pedals which I put on another bike.

I stripped what was left of the bike down completly, cleaned and polished the frame by hand. (chrome was all excellent and decals good enough to keep) I straigtened out the chainguard, then took the forks and chainguard back to bare metal & spray painted in gloss black high impact chip resistant paint. I then applied some NOS red Raleigh fork stickers, (ok, not the correct ones, I think they are for an 80's road bike but they go nice with the black/red/chrome colour scheme).

Found a good example of the originally specced seat, fitted a new set of black MX replica brakes & a 3" Fairylights rear reflector from my parts bin (Originally from a Raleigh Chopper but factory fitted to MK1 Burners also), at the moment I'm using some old school chrome wheels from an 80's Ammaco I parted out (again not correct but they will do for now) with a new set of Duro Comp III skinwall tyres in correct fat/skinny 1.125/1.175 combo. I Fitted a pair of NOS black Union "Rat Trap" padals as fitted to many late 70's & early 80's Raleigh bikes & some nice chrome "V" bars scored off ebay UK with NOS black Co-Union grips & polished SR stem from my parts bin, NOS seatpost from Ebay.

Ok, so it's not completely factory spec at the moment, but it was built up quick for a bit of fun on a tight budget to rag around on sunny days and look cool. It's no racer being quite heavy, short in the top tube & with low 40/16 gearing, but a great little cruiser and very easy to pull long seated wheelies on yippee!

The frame has very classic old school looks, with it's loop tail and drilled frame gusset, the chain stays are welded unusually to the base of the bottom bracket case. The detailing and welds are quite crude and agricultural but then these bikes were not expensive BITD (compared to Mongoose for example). Frame & Forks are made from full Carbospec 23 Tubing, Raleigh's own brand of steel tubes (they also owned manufacurung company Ti Tube Industries), basically a high carbon content high tensile drawn steel tube which they used on many mid spec. road bikes at the time as it was stronger and lighter than regular high tensile or standard mild steel tubes but nothing like Chromoly or Reynolds tubes used on their higher end bikes.

This bike is a rider & a work in progress, it will become more "factory Spec" as and when I can find the correct parts at the right price. Some new decals would finish it off nicely.

Joined www.burnerworld.co.uk check it out for more info, forum and all things Burner related check it out.