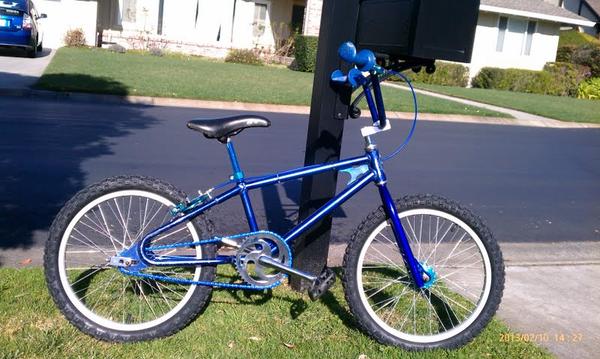 I won the frame on ebay a while back and decided to build it.  The frame is what I believe to be a 1977 Junior with blue anodization.  The bars seem to be Race Inc bars (ebay again) with the same color of the frame, even the fading that is under where the crossbar pad looks just as faded as where the pad was on the frame.  The headset is an old school "Hatta" brand made in Japan. The forks are '79 Tange that have been powder coated in a bluish purple (ebay).  The wheels are aluminum wheels that closely resemble old school Arayas, they have stickers that reveal that they are made in Taiwan, hubs are marked with the logo "Mount" on them.

The wheels, tuf neck look alike seat clamp, and knock off Dia Compe MX brakes came off of a Royce Union bike acording to the person I bought them from; they may be circa early 90's.  The one piece Redline Cranks and the old school style neck were recently purchased new; these parts are currently made to replicate old school parts.  Fluted alloy seatpost (old school original) came with another frame I purchased and the GT seat was given to me be a local BMX shop.

More Bikes From trailrider70 (2 bikes in museum. View all)