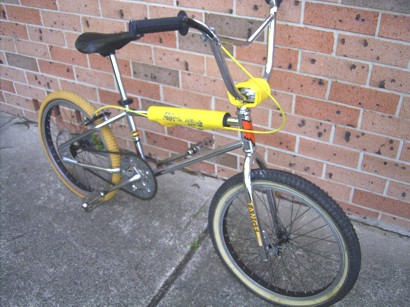 Mark Bradley was one of the designers and welders at Competition Development, this was one of his experimental twin downtube 20" frames that would later spawn the twin downtube cruisers. Not 'officially' a Quicksilver, these were made in the factory and had the same rear end as the early Aus made Team Quicksilver. Only 3 of these were made, the serial number is BBR2. BBR stood for Bradley Brothers Racing. Only the BBR1, and the BBR2 are known to exist. The 4th pic is of Quicksilver factory pro Wayne McIntosh riding this exact frame, note the Fox sticker on the headtube is still there today!

More Bikes From QuickieMon (16 bikes in museum. View all)