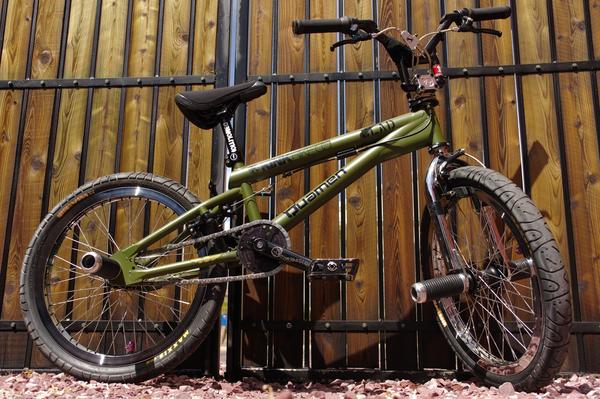 I always wanted a Quamen, but could never afford to build one, then a company brought the price down from $289.99 to $150.00 and I grabbed the chance to finally build my own creation. Its a really solid ride but the freecoaster has a lot of slack in it before it engages so its a little squirrley to ride at times. I had no idea when building it that all the parts on it would very quickly become discontinued. I can't even find any info on the freecoaster to see if it is adjustable. Other than that, this is a flatland dream machine! I hope you all like it!

UPDATE: I re-painted the frame a few years ago using green zinc phosphate primer (aircraft parts primer) and managed to get some replacement decals from the Quamen company. I think it looks better than it did back in the day when it had the butterscotch paint job. Its even sporting a couple of BMX Museum decals now! Its a rolling relic.

More Bikes From OldRusty1982 (2 bikes in museum. View all)