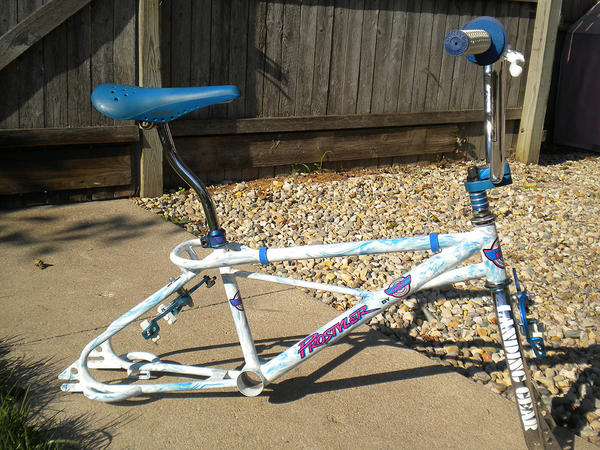 Gonna make this one blingy!

I got this frame form Nasty is Nate on here last summer and have been waiting until the right parts come along that I want for it. I had a chrome one a while ago and was thinking of making this chrome, but that finish is just too cool and it really grew on me. Especially up close, these pictures on the screen really do it no justice, but you get the idea. I'm not into the green in the stickers though, so I'm still looking for an original sticker set, or at least a repro in the original colors. Other than that it's gonna be all chrome, white, and anno blue parts on it. Since this frame is a total custom paint job, I think I'm going to get a couple things re-chromed on this one. No need for this one to be all original finished stuff with a frame done up like that. Probably the cranks and CW bars there will get re-chromed unless I can find a nicer set of cranks for this. Then I'll use those as is on my green one. We'll see. I just put a re-chromed CW layback braced post on it with a blue Kashi seat and it looks pretty cool. One thing it will definitely not have is Profile Freestyle bars. YUCK!!! Handlebars are probably my favorite part on a bike. The right bars on a bike will make it look awesome, and the wrong will make it look stupid. Those bars are always wrong. I totally hate them! Too tall and thin. They make a bike look like it has a giant forehead or something. I'm even one for weird bars as long as they look cool, I just really hate those. Anyway, here's another project in the works. Updated photos as I go.