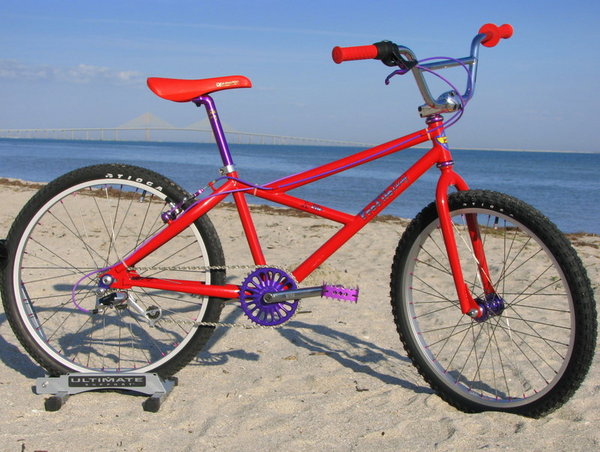 I obtained this frame and fork set from Profile Racing in Saint Petersburg, Florida in the summer of 2009 when they found a few of these framesets up in the rafters of their old warehouse building.  The frames were in new, raw condition.

Purple was a popular color in the late 90's, so it was fitting to use on this red powdercoated frameset.

Also sourced from Profile's vault was this set of Profile 3-speed cassette hubs with Shimano cogs.  This was released by Profile during the latter part of the 90's, but never caught on in the BMX world.  Rims are Weinman AS-7X rims.

Special thanks to Shane at Profile Racing, Pete Bruno for the color scheme idea, and Scott (rcrscott29) for the amazing custom decals that tied the colors on this bike together.

This bike was built in March 2010 for the Spring Fling old-school gathering in St Petersburg, Florida, which is also home to Profile's factory and warehouses.  These photos were taken on the beach behind the Spring Fling location with the Tampa Bay Skyway Bridge in the background.