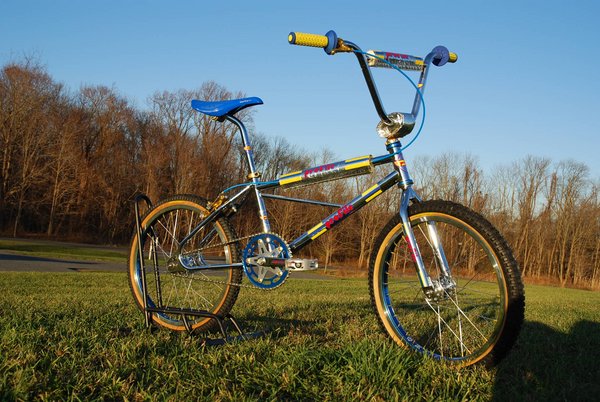 UPDATE 3/4/10 THE FOLLOWING info came directly from PROFILE. However, I just found evidence in BMXA that would refute this timeline. Zagar's joined SCORPION in 4/82 BMXA 10/82 pg. 62-63. There is a PROFILE advertisement with these forks in the 4/82 BMXA on pg. 15. ****The way this fork came about was Rich Zagars, a PROFILE factory rider who also rode the famed Double Bar Profile Champ Pro currently owned by Jeff Haney.  He was the impetus for getting these forks designed and made.  **** There were less than 20 sets of forks manufactured and there are only 6 sets that I currently know of.  They were also used/raced up to around 1985.  There are only 2 F/F sets with original chrome, 2 F/F sets with OG stickers, and mine is the only one with original seat stay CHAMP PRO stickers and only the 5th Profile F/F set that I have seen with these stickers.

4 sets are with there original frames

I didnâ€™t build this bike with the mindset of a BITD build because nobody would build a bike like this nor would a factory team rider.  I built this bike this way as a tribute to PROFILE and all the top quality parts they made.

The other funny story about this F/F set is that it is here on OS-BMX  http://www.os-bmx.com/forums/index.php?showtopic=29430&hl= .  Notice just because this gentleman said he bought it in 1984 does not mean it was manufactured in 1984.  I first saw this on Ebay in February 2008 where it sold for $829 for the Frame, fork, LP 125, Chrome Tuf or Pro neck, Chrome DC hinged clamp, and a chrome MX-1000 caliper and it was originally from New Jersey (I have the auction in my archives).  I did not bid because I was not sure I was getting into the hobby at the time and regretted not buying it after realizing what it was and vowed if I ever saw it again I would get it.  One day it popped up again on the bay this past summer and it was in Germany so I contacted the owner and we struck a deal just for the frame, fork and headset for a great price in my eyes.

FRAME/FORK- Profile Champ Pro F/F with OG chrome and stickers-This F/F combo is 1 of 6 known to exist and only one of 2 with original chrome and most of itâ€™s stickers and the only 1 of 2 with OG CHAMP PRO Stickers on the seat stays.  The straight drop out fork is 1 of less than 100 built.

CRANKS-Profile Early 2nd Generation BOX Cranks without drain holes and with the lip for the spider-mine from when I was 12-rechromed arms-all OG hardware and NOS crank stickers.

BOTTOM BRACKET-Profile stamped bearing cups-some of the earliest they made-only have seen 2 sets (bearings replaced).  NOT made very long.

HUBS-Profile High Flange GYROLITE II hubs with optional Titanium axles with Titanium nuts and washers (all Gyrolites were issued with TI hardware)-NOS before being laced (only NOS set Gyrolite IIâ€™s I knew of before lacing).