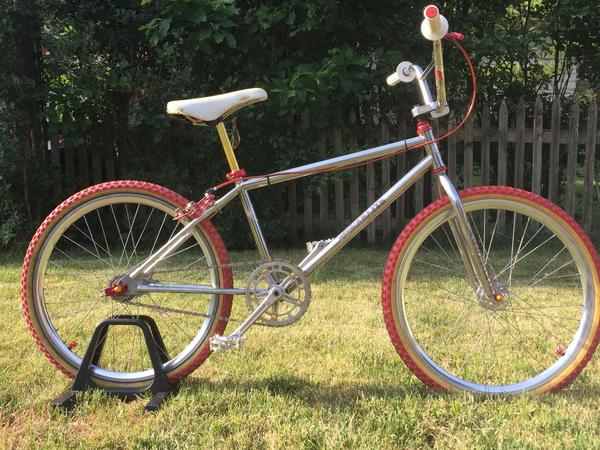 This is my most meaningful build to date.  Those of you who know me best know about my history with Powerlite.  The quick story is that, in 1983, I was introduced to modern BMX (post Sting-Ray) when my family and I moved from the city to the suburbs of Chicago.  While walking home from school one day, I saw this kid riding a Powerlite while carrying a Redline frame.  I believe it was the very next day that I saw him riding the Redline while carrying the Powerlite frame.  Both bikes were cool, but something about the checkered flag graphics of the Powerlite made an impression on me that has lasted the 38 years since.  This bike represents me returning full circle to that warm September day for two reasons; the obvious one is the fact that the bike is an old school Powerlite, and the second is the fact that my 46 year old bones will feel awesome riding this bike, pretending that they are still in that 10 year old body.

One of Ginger's coolest bonuses is that she was actually raced by a shop-sponsored guy back in the 80s.  Erik (skyway2012) was kind enough to not only share with me the bike's history, but he even went so far as to send me a photo of the bike being raced by the former owner back in 1989!  Unfortunately, neither of us knows the racer's name.
Since I have built this bike to be ridden, you'll note that there are a couple of non-era correct details -- namely, the chain tensioners, the reproduction brakes, headset and seatpost clamp, and (most obviously) the Brackens bars.  The idea for the bars come from my high respect for Tommy Brackens, who was Powerlite's top pro in the early 1980s.  When I saw the bars for sale on the Museum, I knew they would go perfectly with the build -- right down to the colors on the Brackens decal.  I told Tommy I was building this bike as somewhat of a tribute to him (he and I are Facebook friends), and he gave me his stamp of approval.  Good enough for me!
Powerlite S-24 frame w/Powerlite 24" forks and original Powerlite nylon padset made by Flite
Brackens Racing Products cruiser bars
A'ME Unitron grips
DK inverted XL cruiser stem
Tange MX320 sealed headset
Dia-Compe MX hinged seatpost clamp
Dia-Compe MX 1000 brakes and lever
Meng Jing fluted seatpost
Sella San Marco Rolls perforated leather saddle
Shimano 600 3 piece cranks w/Shimano 44T chainring and unknown bolts
Suntour XC-II pedals
Sram chain
Araya aero rims laced to Crupi hubs
Porkchop 26tpi axel nuts
Uknown star chain tensioners

More Bikes From perront (24 bikes in museum — View All)