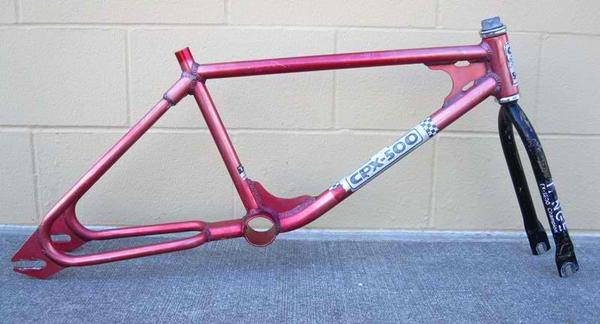 The Only One I've Ever Seen!

This frame is an aluminum alloy looptail Peugeot CPX-500.  Many companies had contracts with Race Inc. including FMF, Laguna, Cycle Pro and even a few European companies, who were getting involved with BMX at the time, like Raleigh/Rampar and yes, Peugeot.

The frame was most likely welded by Bill Bastian at Race Inc.  According to Brian Hays (scientific expert on Race Inc.) the frame was probably built in '78/'79 and is the only one he has ever seen sporting original decals.  Brian also recalls an ad offering these frames, sold as a frame only, never offered as a complete bike.

Considering the serial # (500500),  I would venture to say that it may be the first Race Inc built Peugeot CPX-500 ever made but I also have to wonder how many of these frames were ever made for Peugeot?  I'm not sure if I will try to build this up with matching faded red anodized parts or not.  Hays told me that if I tried to re-anodize it, he would kill me, so I promised not to touch the original finish and decals.

I have come across another CPX-500 which has the bi-secting weld on the "floval" tube, which would actually pre-date this frame, meaning this frame could be a later prototype version or something.  The latest CPX-500 frame looks exactly like the frame in the Peugeot flyer.  Unfortunately it is not sporting OG decals but was sold by Everything Bicycles, a top Peugeot dealer at the time.

Flyer photo is courtesy of Daryl Larson (thank you).  I now have this flyer in my possesion.

More Bikes From Leviathan (59 bikes in museum. View all)